TWWNCBUIP thinks that because I parked the car that I should be the one who remembers where it was parked. 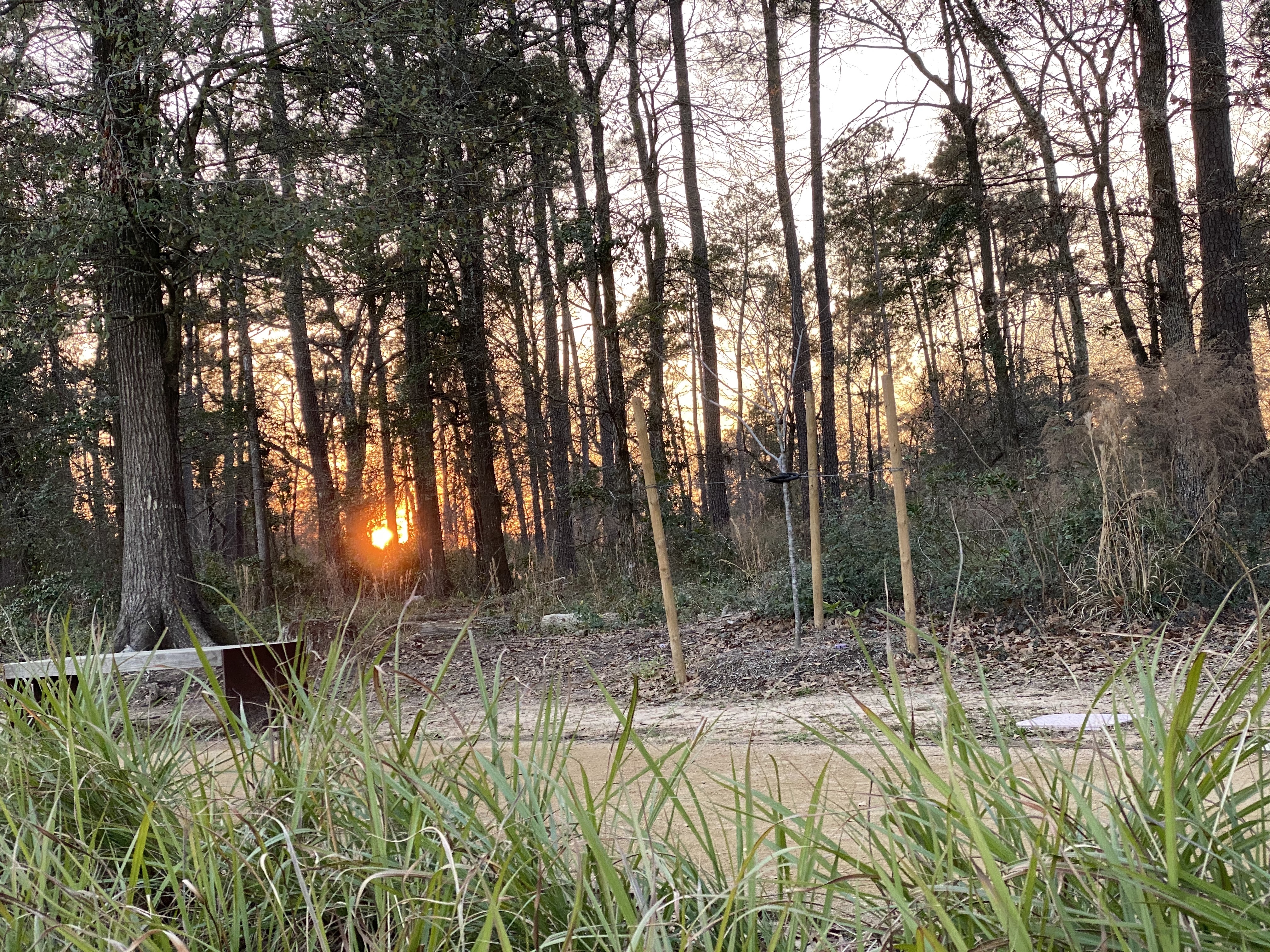 This is a text block. You can tell this by seeing that there are words in it. I like to use the words to give you my take on things including what we have going on at the Duck.

But mostly I can use this space to brag about how smart the black and white dogs are and how much they love the new Eastern Glades at Memorial Park.

I like the new Glades Trail too, I like it because it’s only a mile around and has food trucks instead of the 3 miles around the original trail which only has a yogurt store.

Spending the afternoon with or near nature makes for a good afternoon and a hearty appetite, but all good things must come to an end (I think that either Aesop or Mark Twain said that) so I was thinking it was time to leave this lovely park and  maybe stop by El Rey to pick up a rotisserie chicken on the way home for dinner to enjoy while we settled in for another “Suits” marathon, my new favorite show. I know, I know, everyone and their Aunt Susan has already watched Princess Meghan Rachel, but I just discovered this series.

Anyway,  as we left the Glades, I forgot that I was supposed to turn left toward El Rey and instead I turned right toward home. As I arrived at the light on Memorial Drive I was “barked” into checking out the trails in the Arboretum.  What’s a few more miles of strolling when it comes to making your puppies happy? Okay, okay, we’ll stop in to see if Tiffany is working and we’ll check out one of those  cleverly named trails, Butterfly Lane, or whatever, I can’t remember.

Anyway, Tiff wasn’t around but the pups were really into having  another adventure so off we went. This time we took the outer loop and found a spot where you gaze across a ravine into the backyard of a very nice River Oaks home….I wondered if the manse owners were on the other side looking over at us wondering what we were wondering.  At this overlook spot there were some pictures of the various forms of wildlife that we might expect to see while walking the Arboretum trails.

We could have done without the snake picture…TWWNCBUIP kept her eyes down and on the lookout for snakes for the whole rest of the walk.  All future walks may only be allowed on the more “civilized” side of the parks if we bump into any snakes.  Luckily we didn’t run into any serpents but Linc and Lola did meet their first armadillo a little further down the trail. I don’t know a lot about armadillos, okay, I know next to nothing about armadillos, but this little fella didn’t seem excited to see us, nor did he seem too worried either. However, it’s probably a good thing for both the puppies and the armadillo that the meeting was from a distance.  That armadillo song did keep playing in my head as we walked along though. 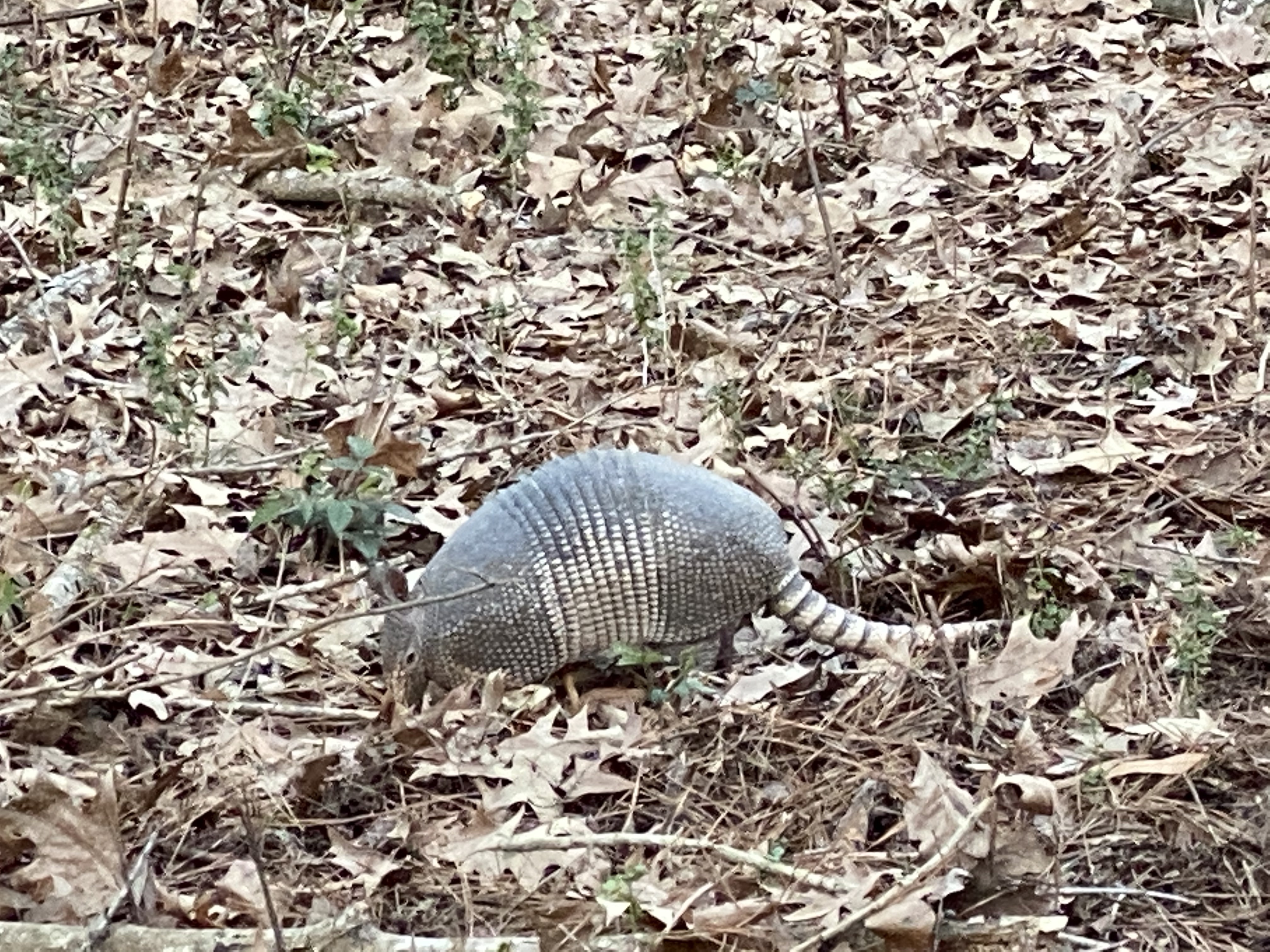 So, as I mentioned way back in the beginning, back when we were the Glades, I was hungry.  By the time we finished this second little walk I was starving.  All I could think about was hoping in the car and getting my chicken.  I think that I walked enough to even have earned a Ben & Jerry’s Cherry Garcia.

So… let’s hop in the car…so let’s go….where’s the car?  It’s over there in that lot by the entrance. Yeah, see that black Jeep?  (See those ten black jeeps?) Umm, that’s not our car. And that’s not our car. And that’s….wait a minute.  “It was parked facing this direction.  I distinctly remember.” says I.  “No.” says she. “It was parked facing that direction. By the where they had the goats the last time.”  This went on for a good bit.  TWWNCBUIP thinks that because I parked the car that I should be the one who remembers where it was parked.

So by now my stomach was rumbling. We walked all the way to the end of the first lot we came to, but no black Jeep. At least no black Jeep that belonged to us.  But wait! I knew what to do!  Check find my car on the parking lot app it will lead us right to the car.  The only problem with my excellent plan was that TWWNCBUIP was talking to the Memphis boy when we arrived and forgot to pay to park at the Arboretum so the location of the car was still showing us as across the street in lot #4706 at the Glades.

It only took another thirty minutes to locate the car and by this time I was almost (I said almost) not hungry anymore. We got our chicken and I got to watch my “Suits” so all is well that end’s well. (Shakespeare?)

She still thinks that because I parked the car that I should be the one who remembers where it was parked.

I am sharing this with you because when I bring it up around here, I get the “look”, and I am thinking that you will be more understanding.

Uh, I’ve just been informed that the counting is all done by the online computer, but I will still get to walk up and give Shake the song requests and the results of the “Stories” feature.

Just want to you note that my “retired” role around here has been expanded beyond “greeter” since the rocking chair duty has been on hiatus for these many months.