When Lyle started to sing not a soul moved. 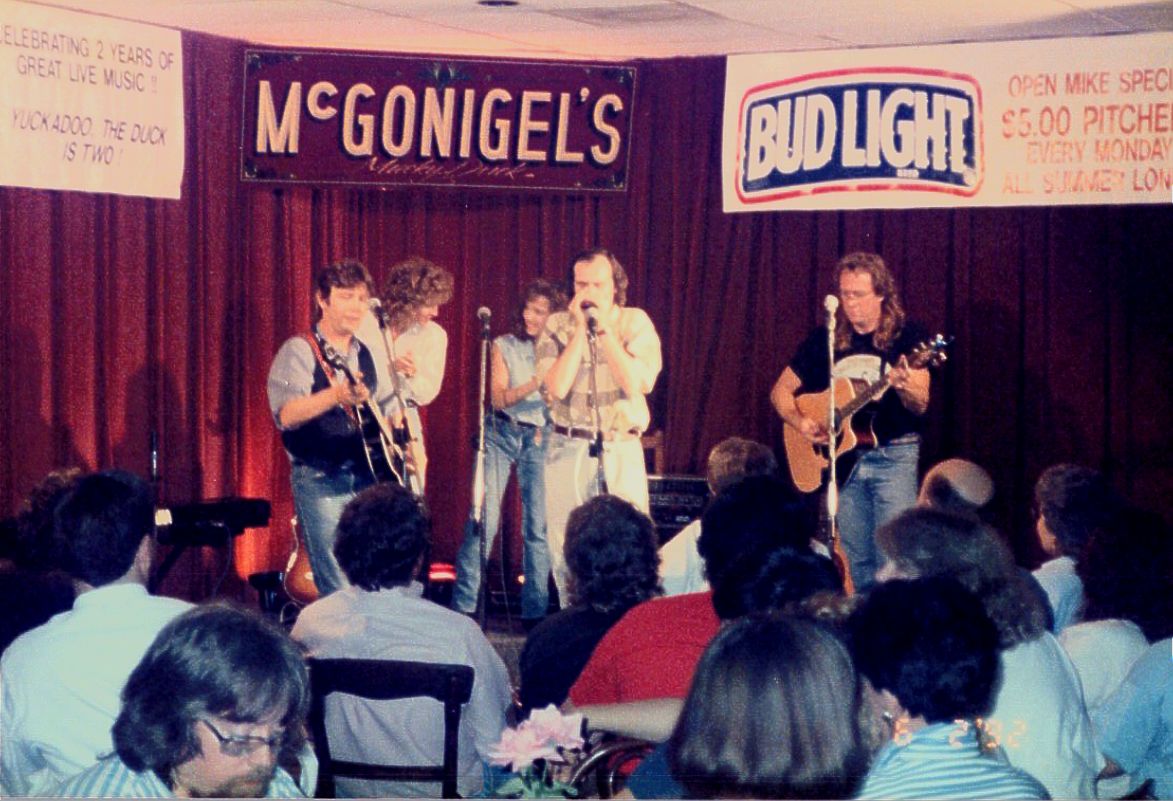 June 1st is our birthday.

We turned 32 years old.
From the time we woke up until we went to sleep last night we were feeling all the feels.
Happy.Proud.
Excited.
But most of all…grateful.

Grateful for you.
Every single one of you. 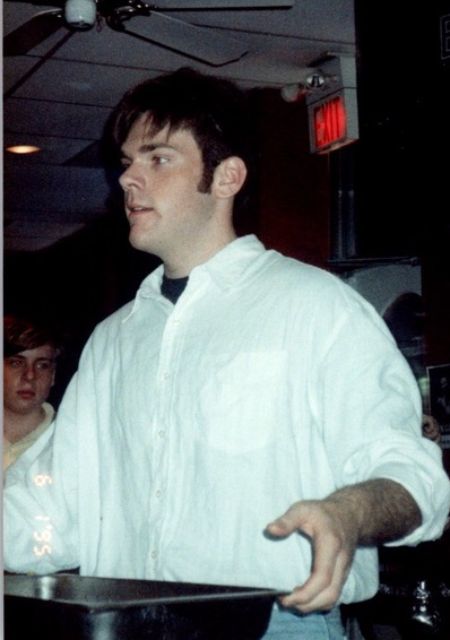 Thank you, all of you beautiful duckers.
Thank you for being here with us, every step of the way.

We were remembering our earliest days and marveling that we actually got through those very first years.
You know, we would sell just enough beer and sandwiches to pay the light bill and the rent for the month.
Then we would breathe a sigh of relief…and before we knew it, the first of the next month would roll around and we would have to do it all over again.
And that’s how it went.
One month at a time.
And before we knew it…twelve months had gone by.
We made one year.
And then two.
And now, thirty two.
In the blink of an eye.
And now, here we are looking back on
thirty-two crazy wonderful years.

So many things have happened along the way.
Mostly wonderful things.
Folks would meet here.
Fall in love.
Get married.
Have babies. (there are SO many duck babies that we can not count them all!)
BIrthdays.
Graduations.
Christenings.
Wakes.
Weddings….with horses!
You have shared your lives with us.

Now, as you know, not every day was a walk in the park.
Remember that time terrible rain when a storm stalled over Houston and Hwy 59 became a bathtub?
We had so much water inside the Duck that beer kegs were floating through the room and cars were floating down the street.  We were all trapped inside until the next morning when the water suddenly disappeared like someone pulled the plug from the tub.
And of course there was that five day freeze.  We had no lights. No heat.  We lost all of our food.
Remember the break-ins. Oh, the break-ins.
But you know what?
We were never alone.
You guys were here with us.
Always at the ready to help us make our way through those calamities.
The good times have certainly outweighed those scary times…because you were there. 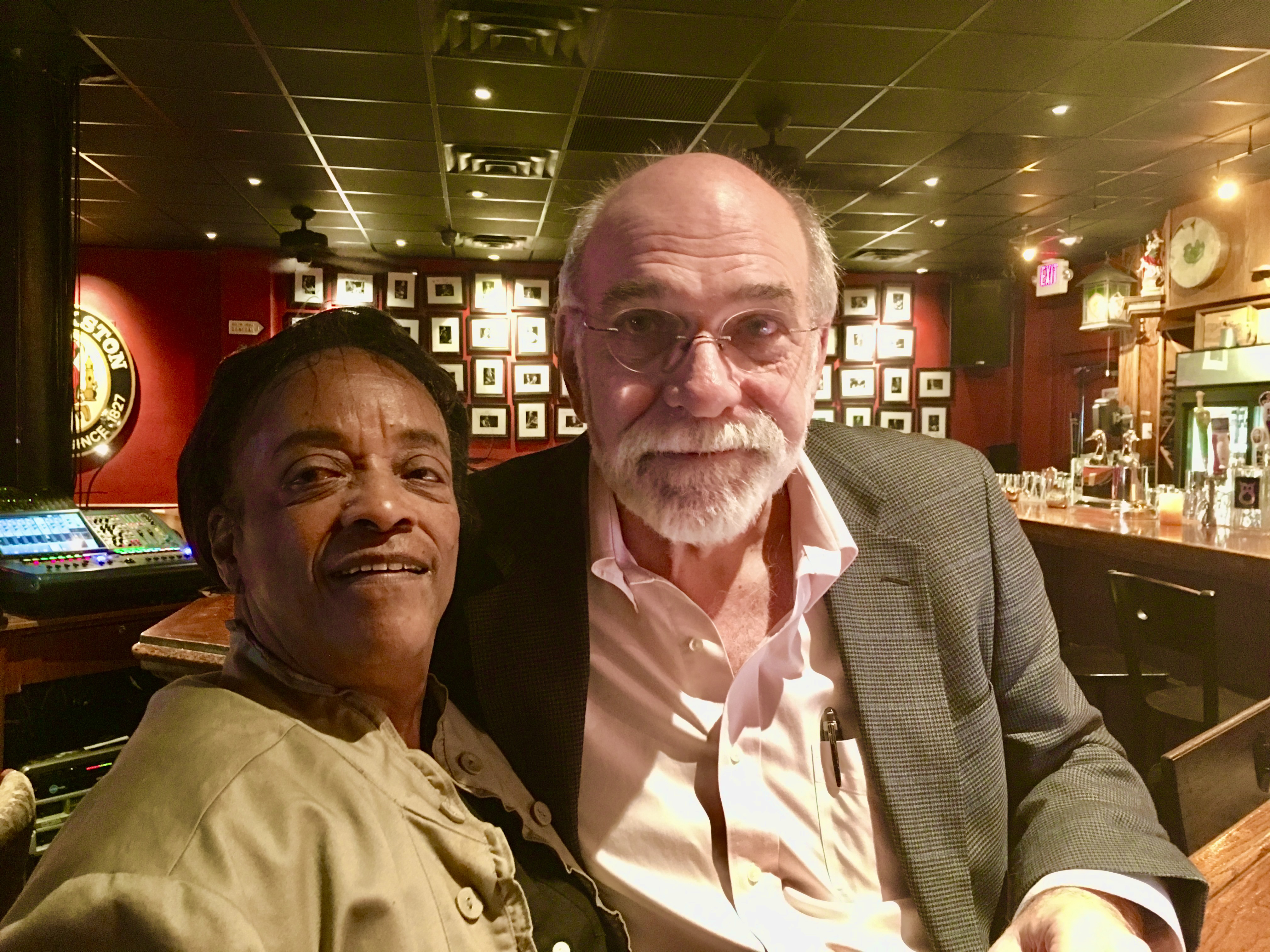 This week I’ve been thinking about all of you, reminiscing over those days gone by, looking through so many pictures and remembering the good times that we’ve shared. And yes, remembering the sad times too.
You know me, getting all sentimental, tender and remembery.

I pulled some pictures from my giant box of photos.
There is no rhyme nor reason or order to them but each one reminded me of moment in time.

Will you take a trip down memory lane with me?

We used to make birthday rhymes for each year but that got a bit more difficult once we reached double digits. The first picture, at the very top is from our Yuckadoo The Duck is Two birthday party. I only know that because that is what the sign on the stage says.

I’m sure you recognize all 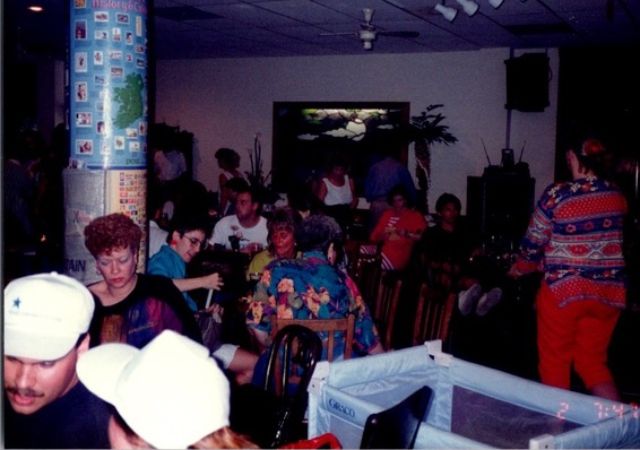 those young whippersnappers on stage, right?
Sure you do! 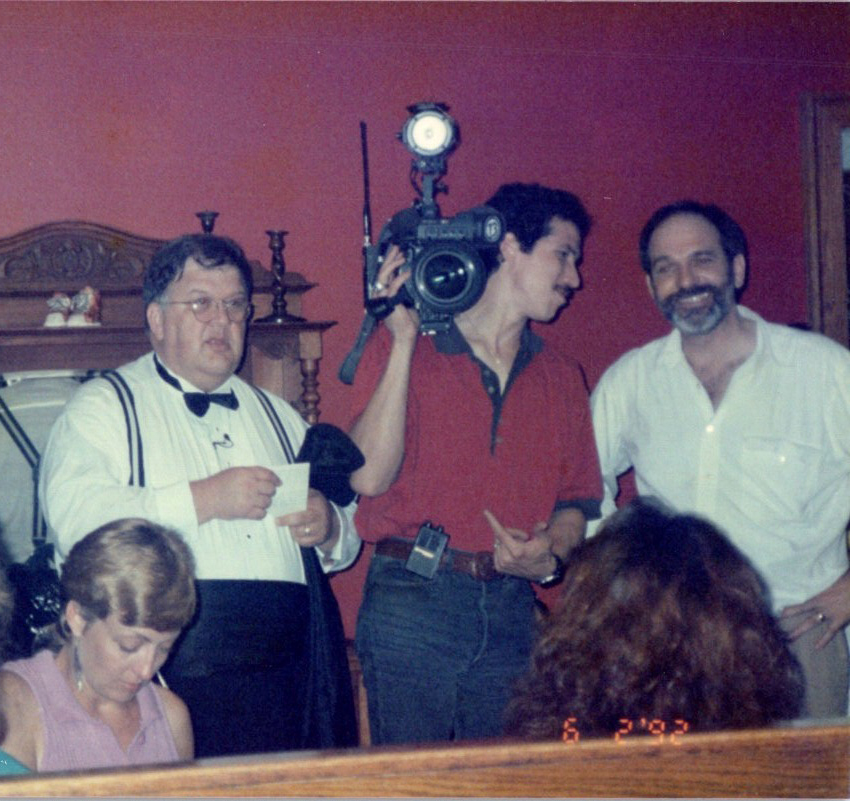 Roberta.Check out that white ceiling.
Boy, we sure were happy to graduate from that to our “theater black” look.

See the picture with the baby crib?
That was taken at our second anniversary party.  Our walls were still painted “Irish Wool” and it would be a few more years before we decided to go with “Rustic Red.”

When we first opened we embraced the pole in the middle of the room and covered it with Gary’s Irish Post pictures. Get it? Irish Post.
Ah…you had to be there.
In later years we tried to disappear that post by painting it black.

Now…about that baby crib.
Which duck baby was in the crib on that day?
Was it our goddaughter Elyse..or could it have been baby Callie, or was it one of our baby Trumbles?

A lot of life happens in 32 years.

Way back when we were a whole lot younger and way more full of energy, we made lots of “out of duck” experiences.

Thanks to our dear friend John we got to participate in a polo match.
The Duck vs. The Ale House.
As I recall, our side won.

In the time before Houston traffic became, well, Houston traffic, we held road rallys.
We would spend every Sunday carefully plotting out the route, making up clues, planning a scavenger hunt for the rally teams. Then, once we thought we had it down, we would give the clues to a friend so they could travel the route to make sure that the clues actually made sense. 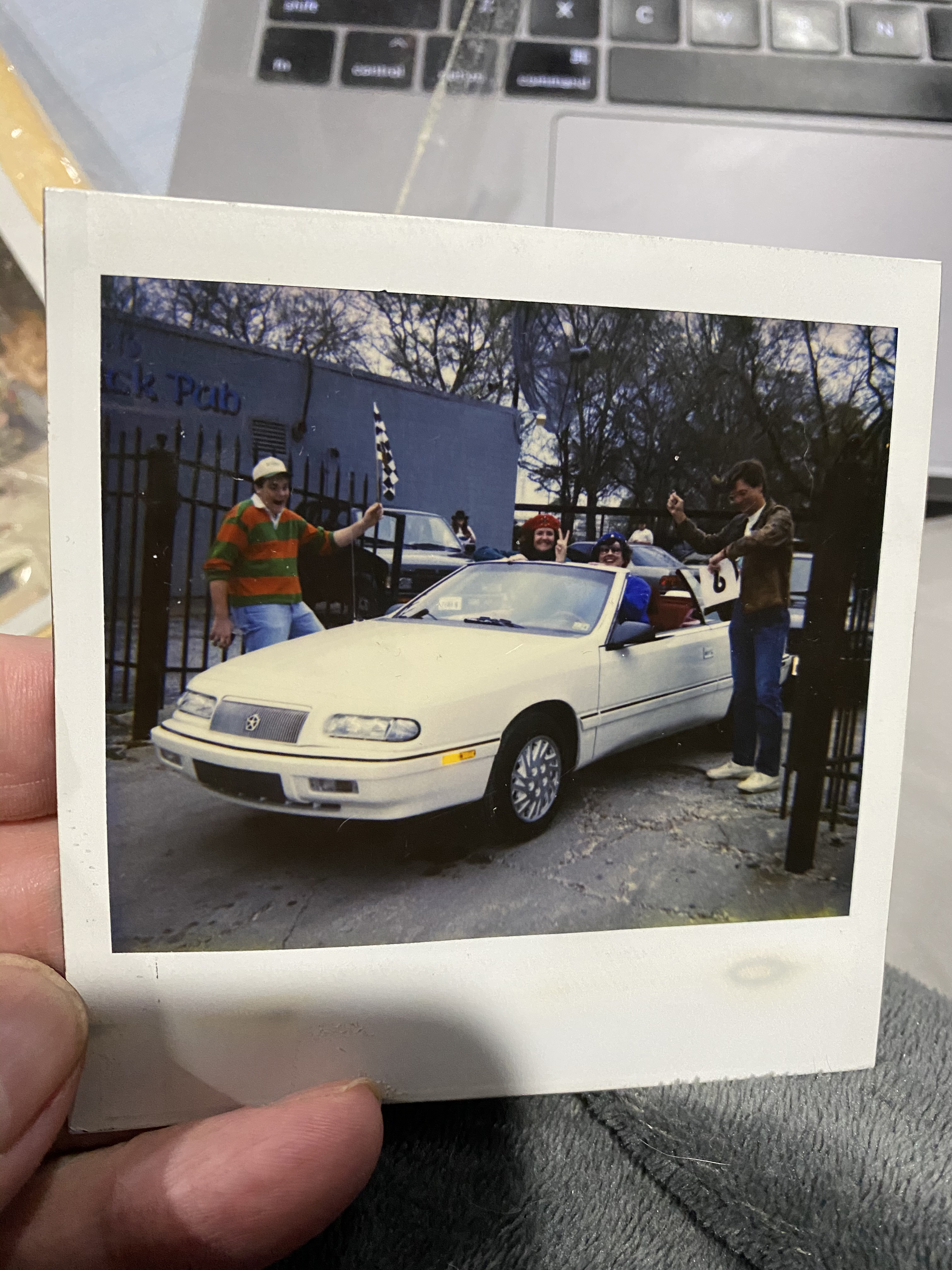 At first we were worried that nobody would want to play. That was a silly. Everybody wanted to play!
We had so many participants that we had to stagger the release times.

One year the participants found themselves aboard the Hermann Park train and the next year they were peeking under picnic tables in Memorial Park looking for clues that would lead them to the next clue.

Along the way they would collect the scavenger hunt treasures to add to their point totals. Little did we know (we were scavenger hunt novices) that some of the players would take all of the ribbons off the trees or change the clues to misdirect the players coming behind them. Little rascals. 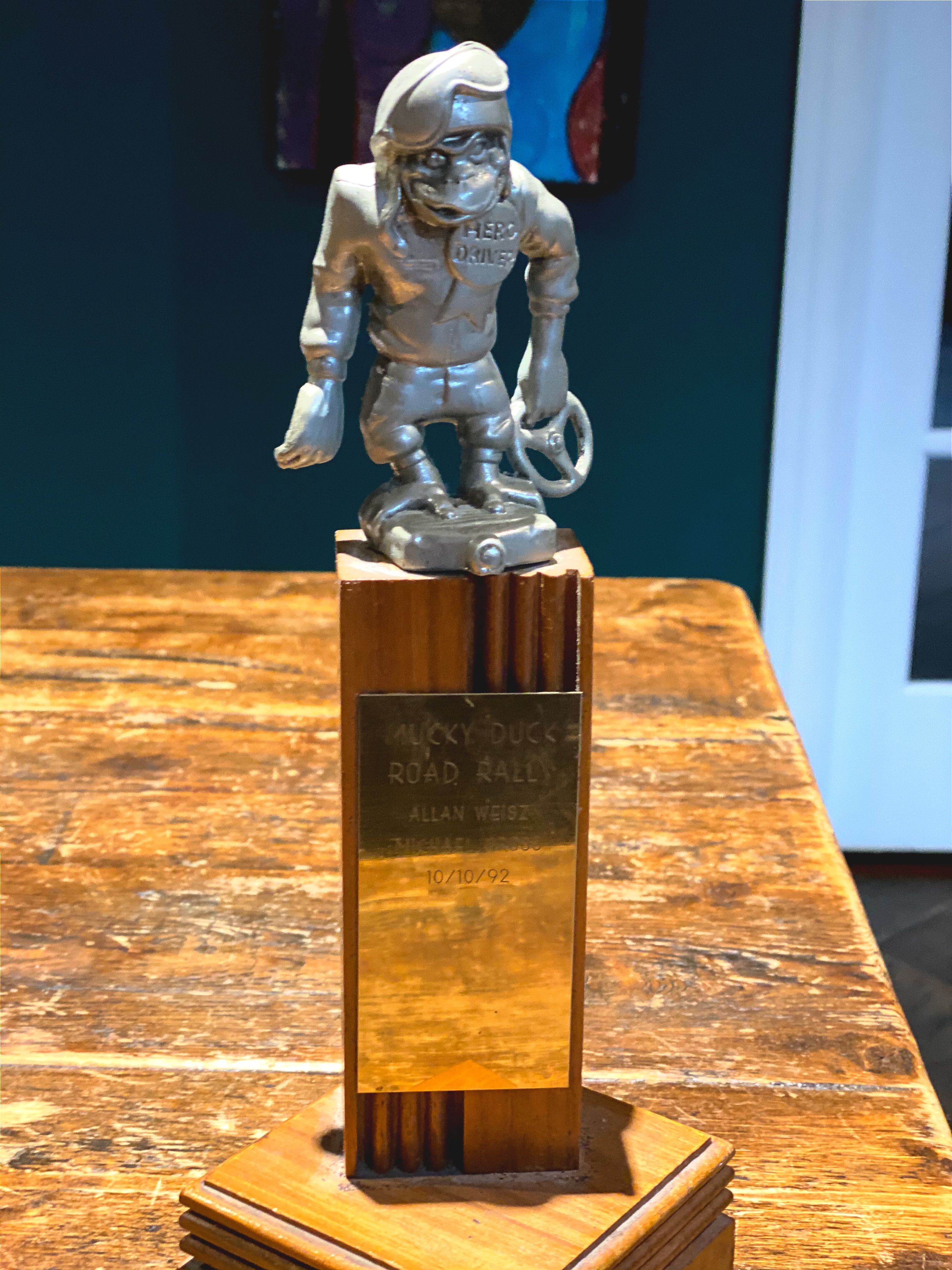 At the end of the day everyone gathered back at the Duck for barbeque and beers and the awarding of the coveted “Monkey Duck” trophy.

That little trophy is still behind the bar.  Remind me the next time that you are in and I’ll take it down and show it to you.

As I recall the Rice University rally team won every year. 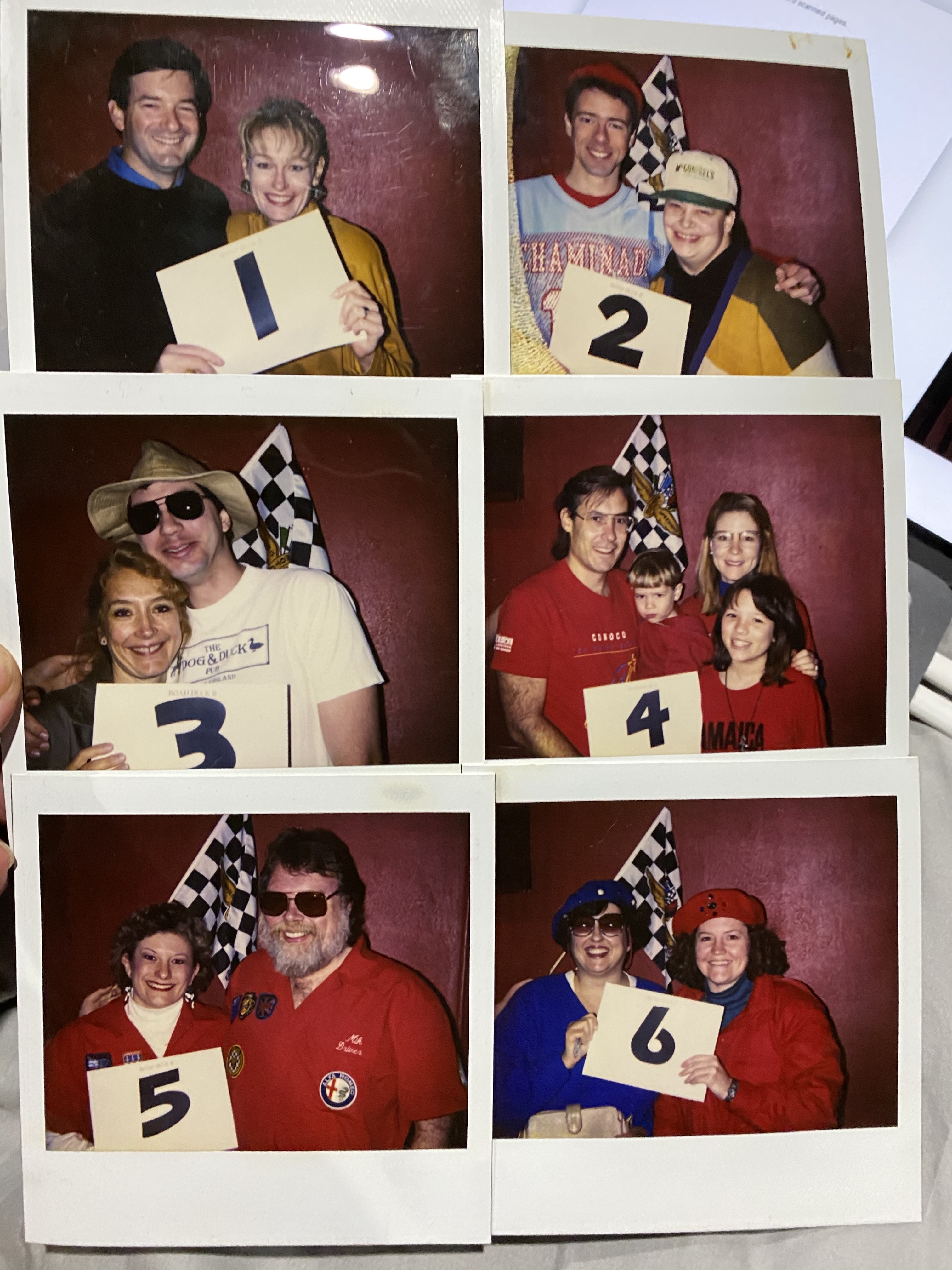 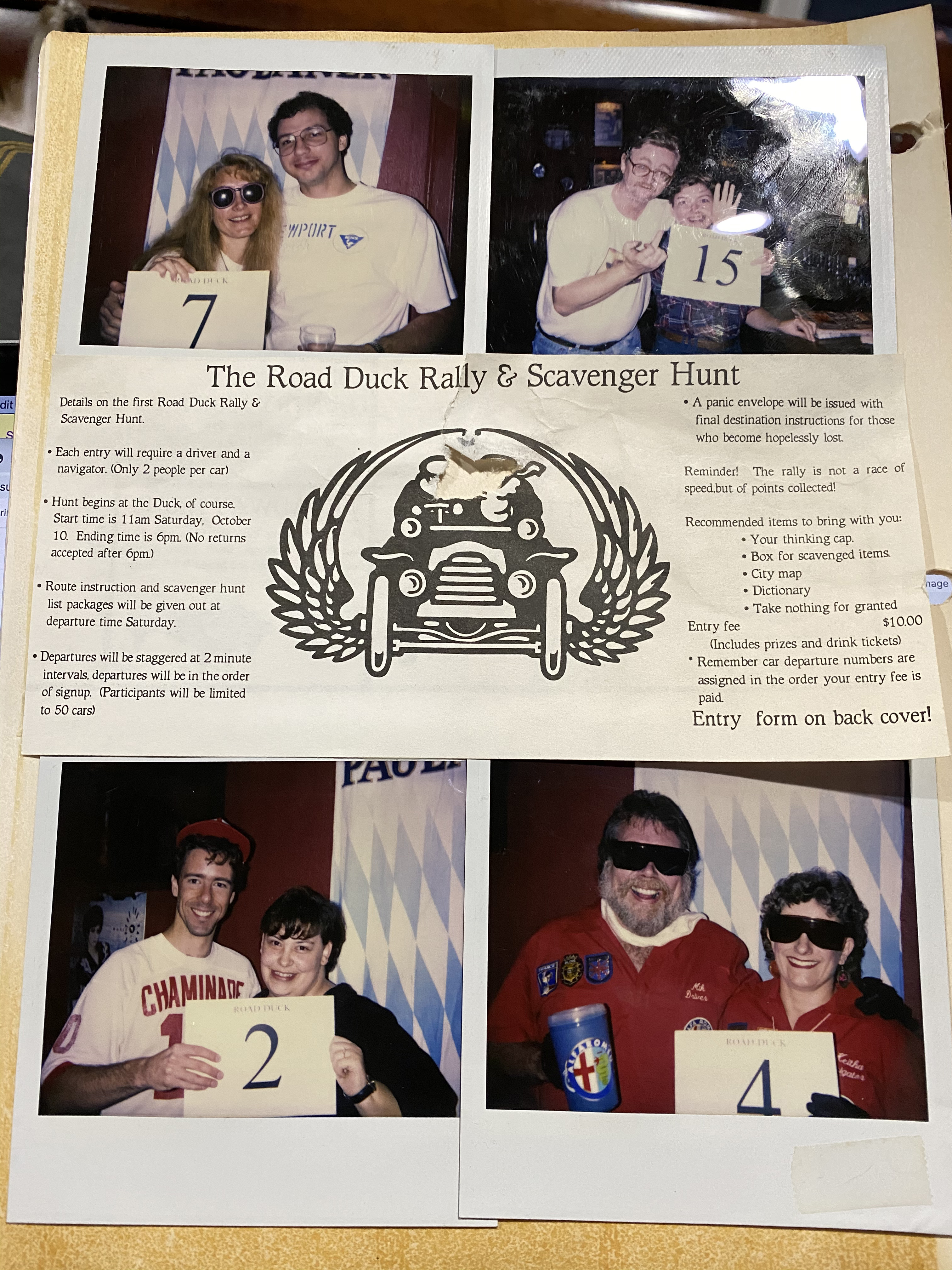 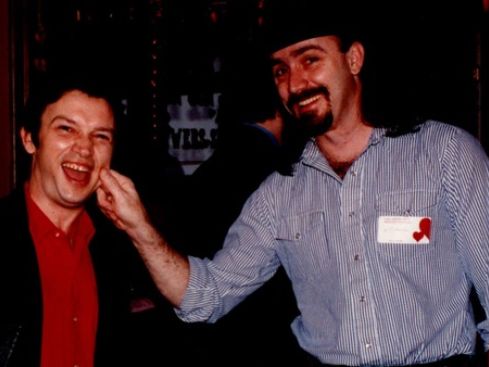 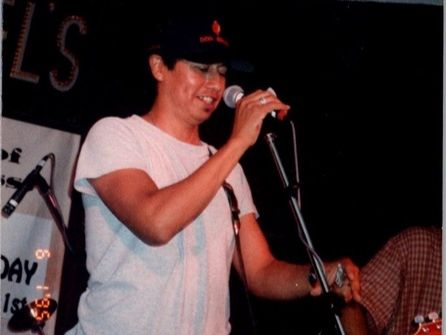 I’ve gone from happy to sad and back again as I look through these pictures seeing the faces of so many dear friends who are no longer with us.  So many memories.

Do you guys remember when Alvin Van Black would stop by to film our birthday parties?

Alvin was known as a curmudgeon on his radio show but he was always charming and warm and very kind to us.

And how about that picture of our handsome boy? As always, there he is helping mom and dad. In this picture he is refilling a catering pan for one of the Duck birthday parties.
I haven’t seen our boy without beard in decades. His mom is hoping for a return to his clean shaven look but I’m not holding my breath for that.

I found several pictures of Alejandro. Two were taken on the road. We didn’t travel much back in those early days but for some strange reason, if we were traveling, we would bump into Al.
Once his bus was parked on a Chicago street. We only knew it was Al’s bus because one of his bandmates was getting off the bus as we walked by.  Another time Al was walking down a street in NYC. Another time we saw him on a corner in Nashville.  I think he was stalking us.
Al used to rock that white tee shirt look you see in the first picture but now he looks like he just stepped out of the pages of GQ.
Although this last picture is more like Rodeo Weekly. In this photo, Al and his beautiful wife Nancy are visiting with Dr. Pat and yours truly after his last show at the Duck. 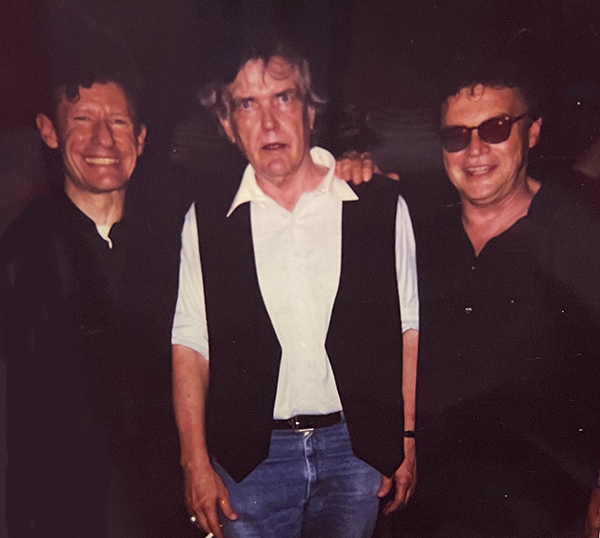 Hey!
Check out this Lyle Lovett, Guy Clark, Terry Allen Polaroid!
Oh I remember this night like it was yesterday! We were thrilled beyond thrilled to welcome Terry Allen and Guy Clark to the Duck.
We had a packed house (like the old days kind of packed… not one square inch of space to spare) and the room was buzzing with excitement.

Toward the end of the show Guy and Terry invited their old friend to join them on stage.
And up walks none other than Lyle Lovett.
What a moment.
We only have two pictures from that night. One is this Polaroid and the other hangs behind the bar.
When Lyle started to sing not a soul moved.
I looked up and saw our son and his fellow bartender perched up on the back bar watching.
Not an ice cube clinked.
Not a drink was poured.
Everything just stopped.
When Lyle finished singing the place erupted.
What a night.
I loved every minute…even when Guy was giving me a hard time from the stage about our “smoke free” policy…do I need to tell you that he lit up anyway?  Oh, those were some heady, exciting times. 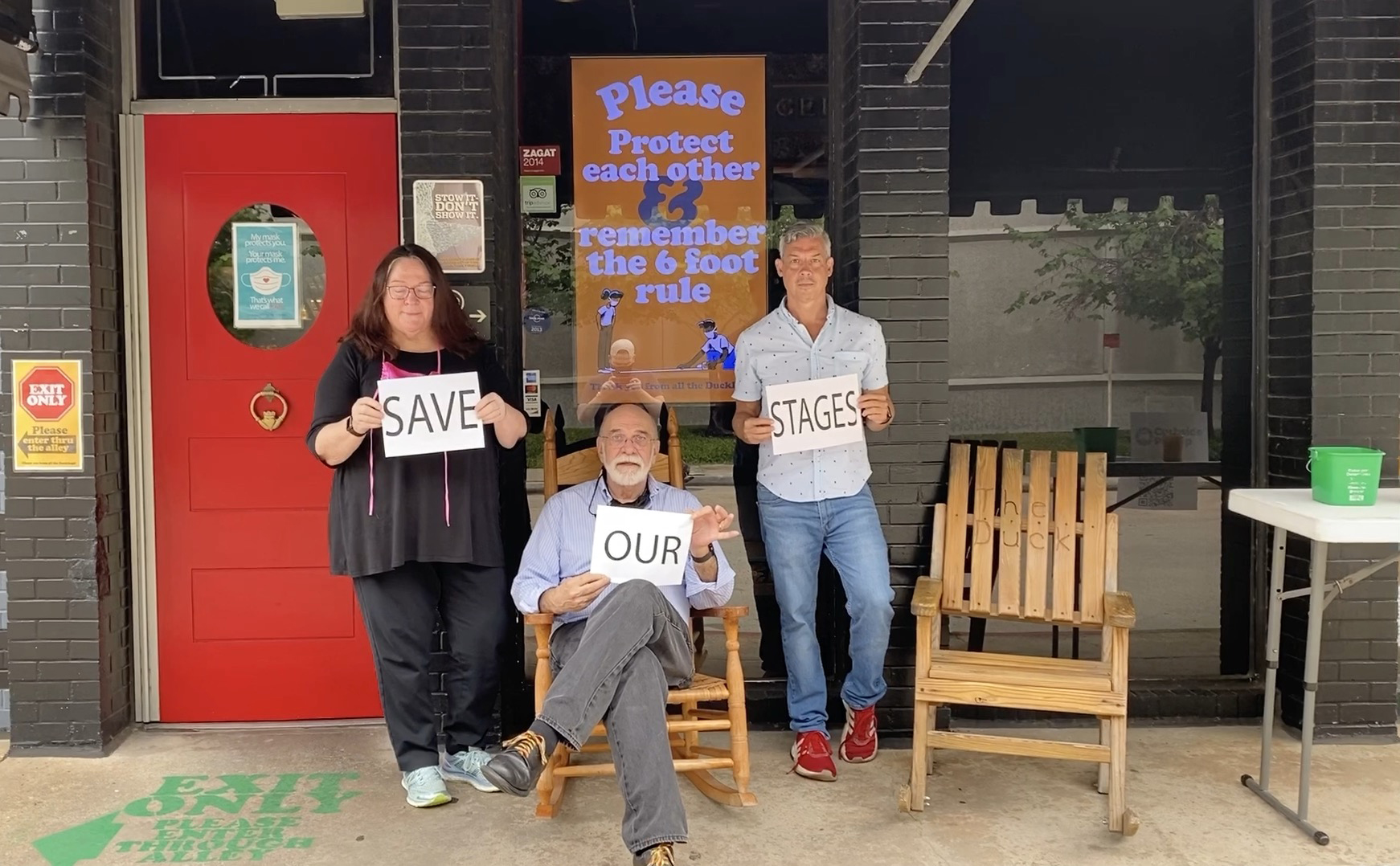 This picture with TWWNCBUIP, Shane and I out front in our rockers was taken during the time that we were not allowed to have guests inside the building during the dread 2020 year.
Save our Stages asked that venue owners across the country to post an SOS video to help get the attention of Congress.
Guess what?
Congress listened this time.
The Shuttered Venues Act was passed…just in the nick of time. Thousands of venues were rescued from the brink.

You may have noticed that most of the pictures with the artists include me as a rule. There is a reason for that.  TWWNCBUIP not only doesn’t want her name in print, she is also too shy to pose for pictures. 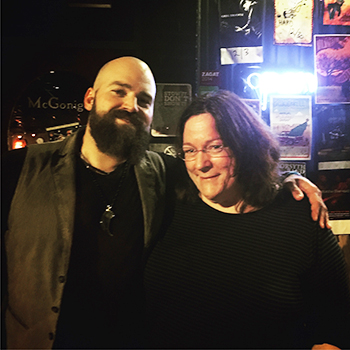 However, one night, after one of his giant concerts in town, Zac Brown stopped by the Duck to say “Hi.” He’s very thoughtful that way. He has dropped after his concerts a few times. On this particular evening  TWWNCBUIP was outside saying goodnight to him when someone asked for a picture.
He said he would only pose if TWWNCBUIP would join him.  By jove, he got her to do it.
She always manages to be off somewhere doing something when the picture taking happens.
Teresa and Shane are the two most camera shy people in the place. It’s for this reason that it’s my face you usually see smiling back at you. 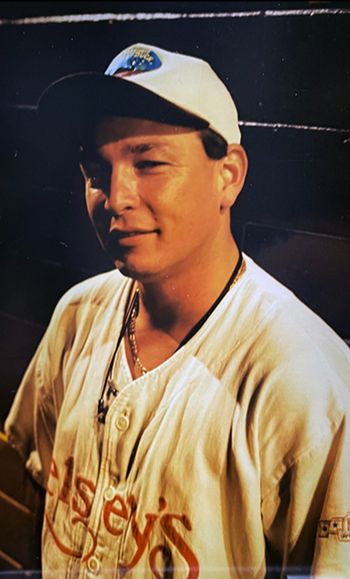 Do you remmemberguys when Mark Portugal used to hang out at the Duck?  Those were some super fun days.
We were lucky enough to meet Mark when one of his good friends introduced him to the Duck.
From that day on Mark became a Duck “regular.”
When the Astros were in town Mark would bring his teammates over pints and pies after the games.
We got to meet not only the Astros, but the visiting teams too.
Those were some pretty special times.
One night we had half the Astro’s line-up behind the bar pouring beers. I remember that they were there watching Feo y Loco, I just don’t remember why they were behind the bar.

One day Mark dropped by for lunch but he wasn’t in the mood for our usual offerings.
So he made his way to the kitchen and concocted a sandwich more to his liking.
A little turkey, some avocado, a few slices of munster, bacon…all piled high on a baguette and then melted in our toaster oven.

That was the day the Mark Portugal was born.
Our number one selling sandwich for thirty years.

I could keep on meandering down memory lane but you guys must be ready for this old guy to give it a rest and I need to return to the present so I can get the calendar for the next month ready.
Thanks for sharing this time with me.
Love, Rusty