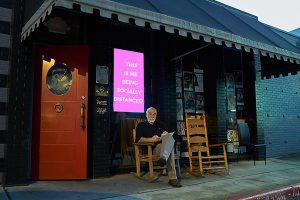 Seems like only yesterday that we were strolling down memory lane sorting through the scrapbooks and sharing stories with you about the early days. And then wow, corona happened and everything changed. What a crazy few weeks this has been.
For all of us. Everybody is working from home, we are waiting in line to enter the grocery store (still no toilet paper!) and it seems that everyone is out walking their dogs. All of the rites of Spring have been canceled or postponed. No proms, graduations, baseball or Easter bunnies. I don’t know about you, but I don’t know what day it is. It feels like the clock has stopped.

Our boy was so worried that we might catch the dreaded corona that he was relentless about insisting that we, his elderly parents, stay home for the next few weeks. This is really hard for both TWWNCNBUIP and me. That’s where we go. It’s what we do. But for now, I am going to stay home and sort through thirty years of pictures and remember stories and attempt to share them with you.

Tonight I was looking through some boxes and these pictures fell out. There is no rhyme nor reason that they are all in the same box, but I’m just going to go with flow, since that seems to be the way things are right now. 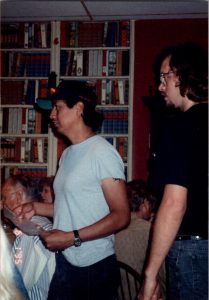 I love this picture of Alejandro. So casual in his white tee shirt and baseball cap. We never used to know which Alejandro would show up to play. A duo, an orchestra, a marching band. But you know what? It didn’t matter, every Alejandro show was a night to remember. I used to love sitting around talking after the show, drinking wine, smoking cigars and just hanging out with Al. Good memories. 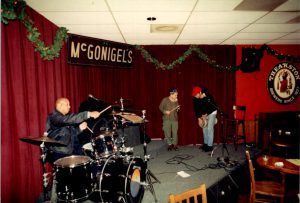 Do you remember the night that Ani DiFranco played the Duck?
Not many do.
Actually, she played two different times. The second time she was with David Rodriguez (yes, Carrie’s dad) and their show was called Beauty and the Beast. Anyway, the first time Ani played I think Mike, Frank and Craig were the only people in the audience. After the show Ani invited our police officer, Vince, up to the stage to play drums with her. That was a pretty special night. 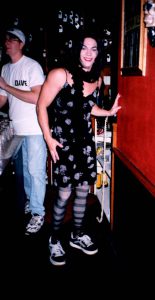 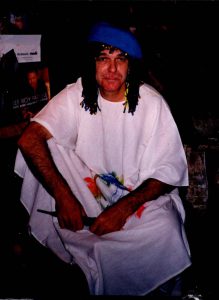 Don’t ask me how these Halloween pictures wound up in the same box as Al and Ani, but they are, and I feel like sharing them with you.

The good looking lass with very toned arms is Shana AKA as Shane, our intrepid General Manager. And the dude below, well, I’ll give you a guess. TWWNCNBUIP screamed when I walked out of the bathroom with a clean shave. She really didn’t know who I was because she had never seen me without my mustache.
When we got to the Duck no one knew who I was not even our bartender. I went to the bar and ordered a Guinness. “That will be $4.25” said he. Rather than give away my identity I reached under the caftan and pulled out some cash to pay for the beer.

I know there are hundreds of pictures of you guys from Halloweens past and when I find that box I’m going to prove that Shane and I are not the only ones who like to play dress up.

I have been working with all of the artists and the agents for our upcoming shows. Some, as you will see have been rescheduled. Some reschedules are still being sorted out. Please bear with us while we work this all out. Thank you to everyone for your patience.