After 30 years we have a few stories to tell, but some stories are best told by others…. 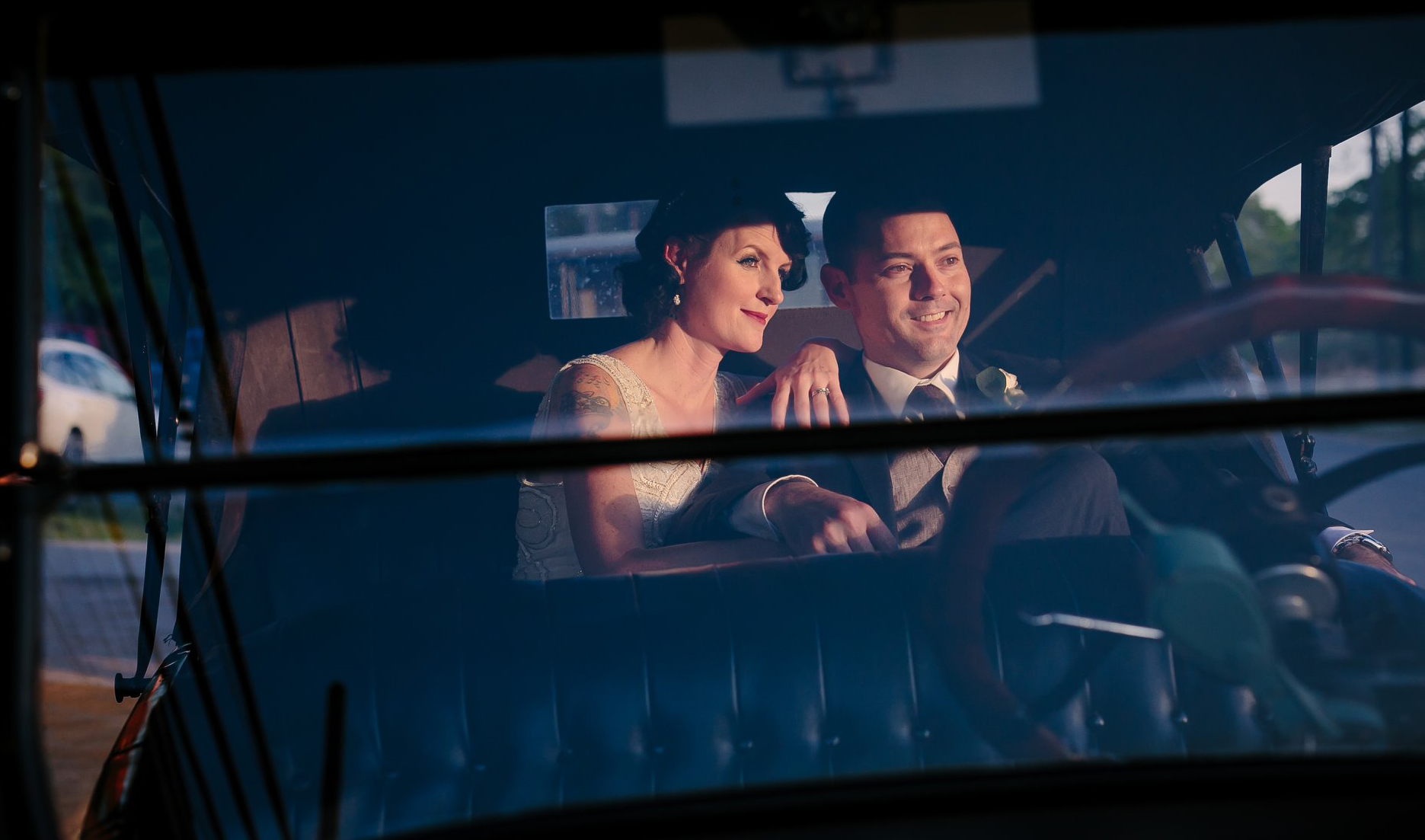 None of us were supposed to be at the Mucky Duck that night, but we were.

I had just spent the day in College Station studying for an exam. A friend and I decided to take a break and swing by a dive bar and kick back. While we sat, a funky little band set up and started wowing the crowd. I liked it.

Asking her if she ever played in Houston, she sadly gave me a “No.”
Oh well…we enjoyed the rest of the evening before starting to make our way out. Just as I was about to clear the doorway, I felt a light tap on the shoulder. It was the lead singer from the band we watched earlier. “I just found out we are playing Houston.” she said. “Little place called the Mucky Duck. Ever heard of it?” I couldn’t say that I had.
I thanked her for the heads up, jotted a mental note and made on with my night.

Little did I know, there were a few text messages being exchanged that same night back in Houston. Something along the lines of “Can you cover my shift tomorrow?”
“Sure, no problem.”
“Thanks, I owe you one.”

I changed my plans the next morning and made it back to Houston. I debated on whether I’d go to the show that night or not. I still had some studying to do and the test was coming up fast. I got a little work done before my curiosity started to get the best of me. So, I packed up the books and set out to find the Mucky Duck. 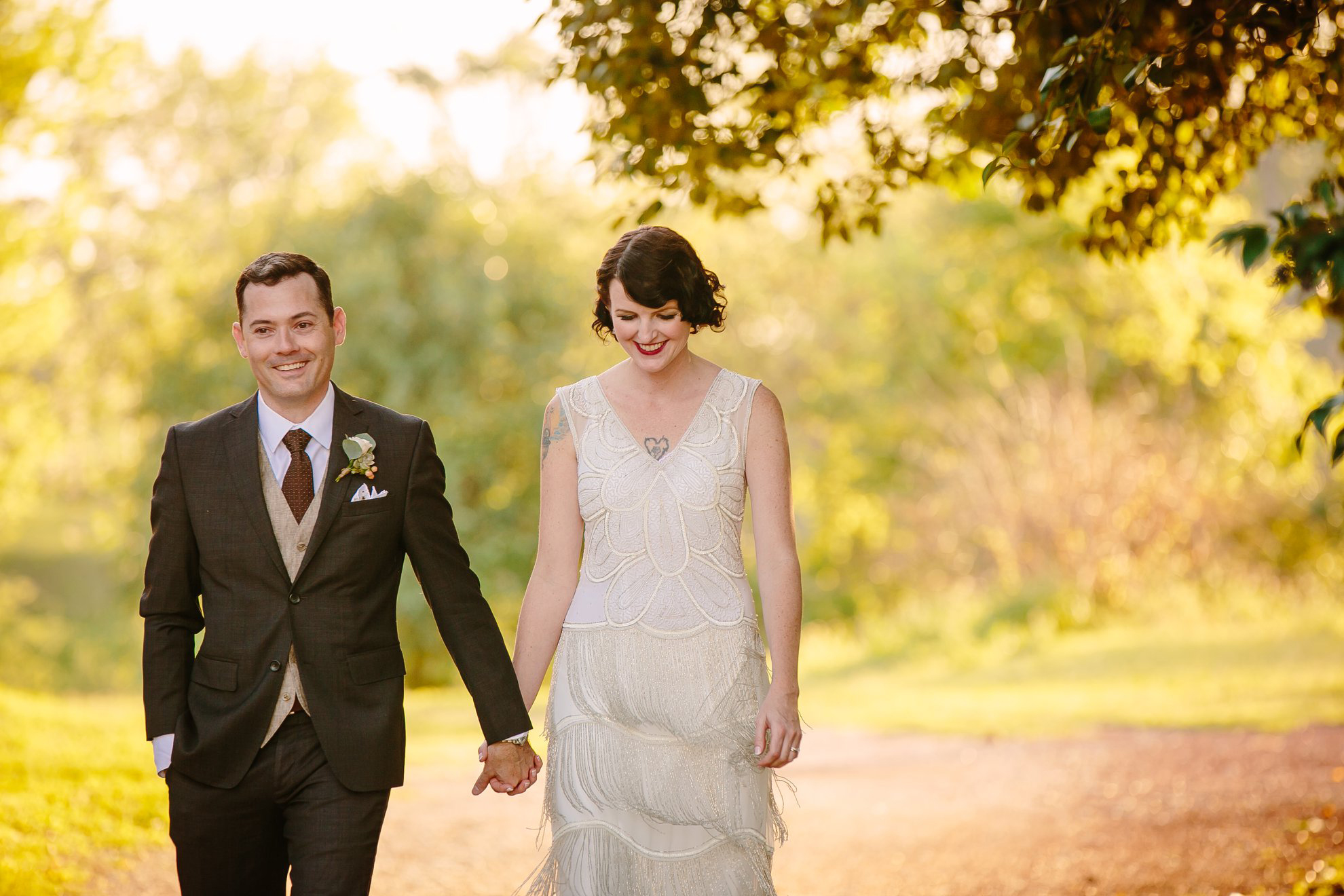 that same exact time, somewhere across town, there was a bartender heading toward the Mucky Duck to cover the shift she had committed to the night before.

I got to the Mucky Duck a few hours before the show, posted up at the far end of the bar and propped open the book. As I began to study, the bartender was clocking in, setting up and getting ready for her shift.

“Can I get you something?” she asked.
“I’ll take a Makers, neat.”
“Sorry, we only sell beer and wine.” Strike One!

“A Bud Light would be nice.” She came back with a cold Bud Light and a look on her face that questioned my choice in beer.  Strike Two!

She saw the books, asked the obvious questions. We talked when she wasn’t busy and had a genuinely nice time. I changed up my beer choice to one that didn’t draw a scowl, watched the show and, when done, settled up the tab to call it a night.

Before I could leave, the bartender slid a little piece of paper across the bar, a number, wow. So begins the adventure.

Like I said, none of us were supposed to be there. I met my wife working a shift that wasn’t hers, at a bar that I hadn’t heard of yet, catching the show of a band that wasn’t scheduled to play, in a town that I was not supposed to be in that night, but we were.
I’d say it worked out pretty well. 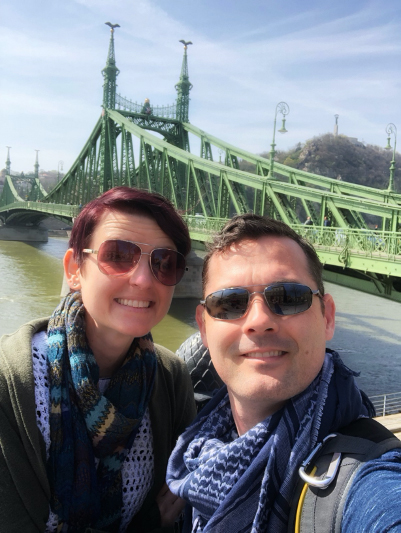 So not only did I meet my husband at the Mucky Duck (together 12 years now married for 2) but It has raised my standards for all things in life. My very best friendships came from the crew that I worked with!  I can’t go to “concerts” anymore with the giant screens and waves of cell phones.  The Duck loves music enough to do it right. It attracts other music lovers who stop talking, put down their phones and get downright intimate with the artists.  One of my favorite stories, out of so, so many after my 8 year tenure there, was meeting Ms. Bonnie for the first time.  I had only worked with the night crew and while I had heard stories of how long Bonnie had been with the Duck (actually Bonnie was around even BEFORE The Duck) and I knew all of those fabulous dishes coming out of the kitchen were made by her, but we hadn’t met yet.  I was working a Saturday brunch and putting in food orders left and right. One patron had ordered a BLT with a fried egg on it.
It wasn’t on the menu, but we had BLTs, we had eggs, what was the harm? I should mention that the duck is a very traditional place.
100-year-old decor, NO frosted mugs, Irish Beer is Black, not green, and, Bonnie wasn’t putting ANY EGGS ON BLTs.  I go back in the kitchen and was met by a short, sassy lady with soulful eyes and a look that had said “Go ahead, I’ve heard everything.” 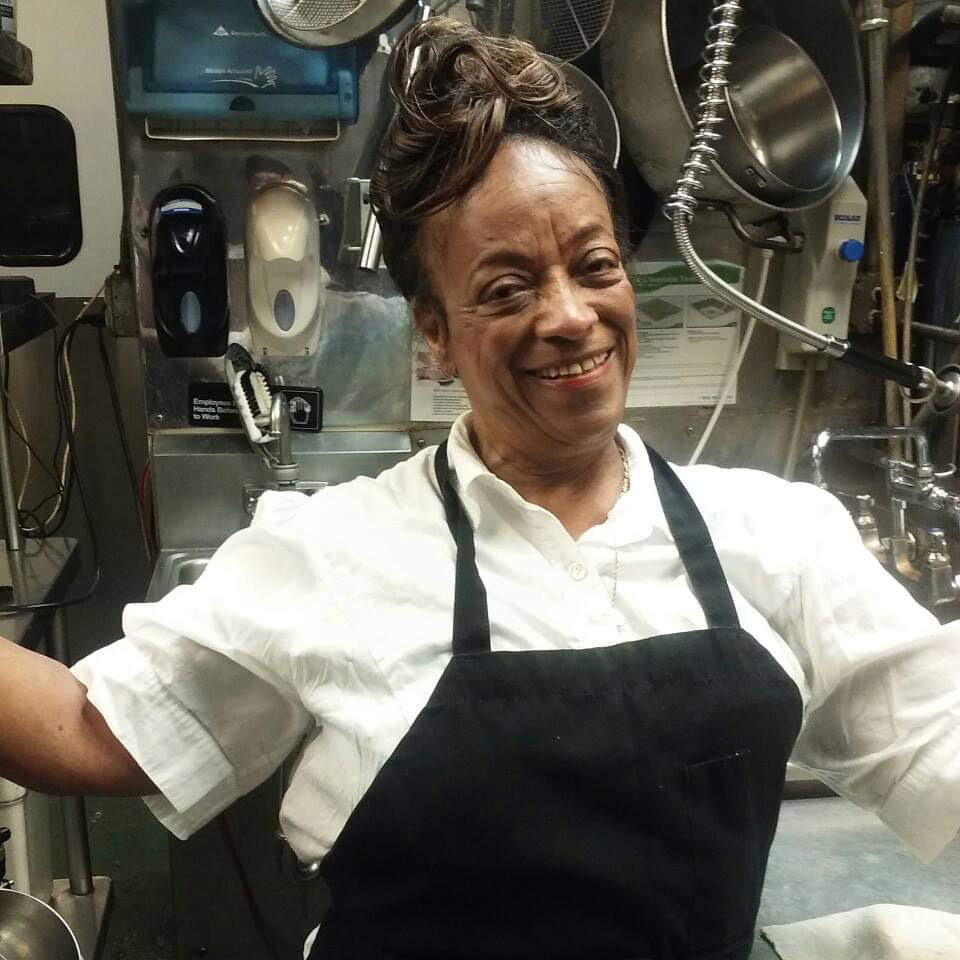 “Where on the menu does it say “fried egg BLT?” Ms. Bonnie asks in a voice that naturally carries.
“It’s an egg, it’s no big deal right?” a 26-year-old me says, half confident, half voice choked off at the end.  “I’m going to do it, but this won’t be a habit.” Ms. Bonnie says, turning to the stove.Great first impression Ashley, I was thinking to myself as I went back out to the dining room.  Each time I went back in Bonnie was bustling around, talking out loud to herself or maybe just anyone who would listen and you could tell this was her second home. She didn’t say much to me, and I wasn’t sure if this was just her way or if I had, in fact, already halted the start of our relationship with a stinking egg. So I did what any rational, young, fearless young server would do.
I ordered a fried egg on EVERYTHING. Thinking I was hilarious, I pop back in the kitchen with an aren’t I so funny, give me validation look…while saying, “Hey, don’t really want an egg on that, I just thought it was funny.”

This was met by a “What is wrong with you look?” which Bonnie is the MASTER of by the way, and no verbal response. The look should have been enough, but was it?  Take 2 and I got a little bit of a smile and a side glance, but still no acknowledgment of my adorable, desperate, cleverness. By order 3, Bonnie just laughed (and laughed). She told me she thought I was crazy.

Ya kinda have to have your quirks to find your place in the Duck family and it was agreed that I was in good company. After that, the laughing never stopped (she actually called me “Fried Egg” for the rest of the day.  I spent 8 years with Bonnie as our Queen of the Kitchen and even after I left the Duck she would rush out of that swinging door anytime she heard my voice on the other side.  The Duck and it’s crew will always have a special place in my heart!
Happy Anniversary!! 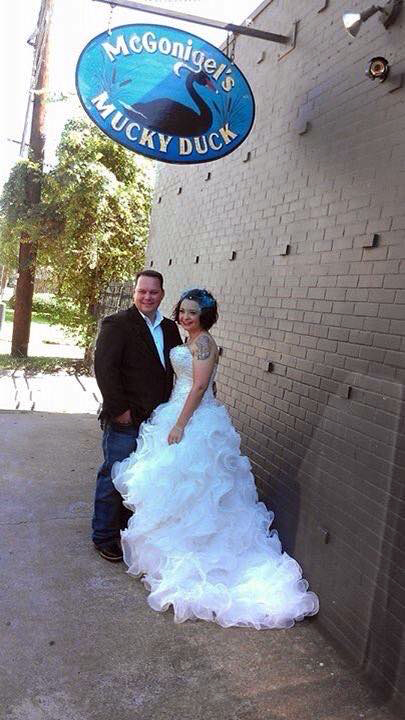 Ben and Missy met in the fall of 2009. Ben had already been working at the Duck and Missy was the “new” girl. 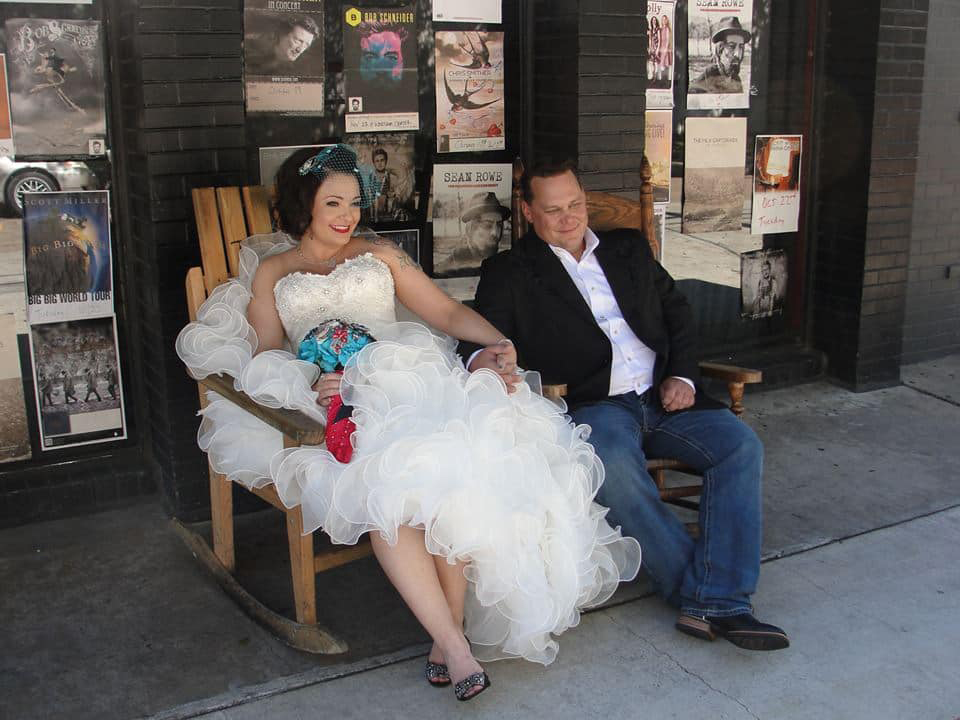 said he would love her and everyone told her to watch out for Ben’s pranks. Well, all he ever did was open doors and help her clear her tables, and she made him nervous…so he asked her out.

They tried to hide it, but the love was real. Four years later they were married on the Duck stage with 50 of their favorite friends and family there to celebrate.
It was a truly great day.Ten years after their first date, they’re living in Austin and when their schedules allow, they make the drive to Houston and the Duck take in a show, eat some pies, and still volunteer to help out on St. Patrick’s Day. 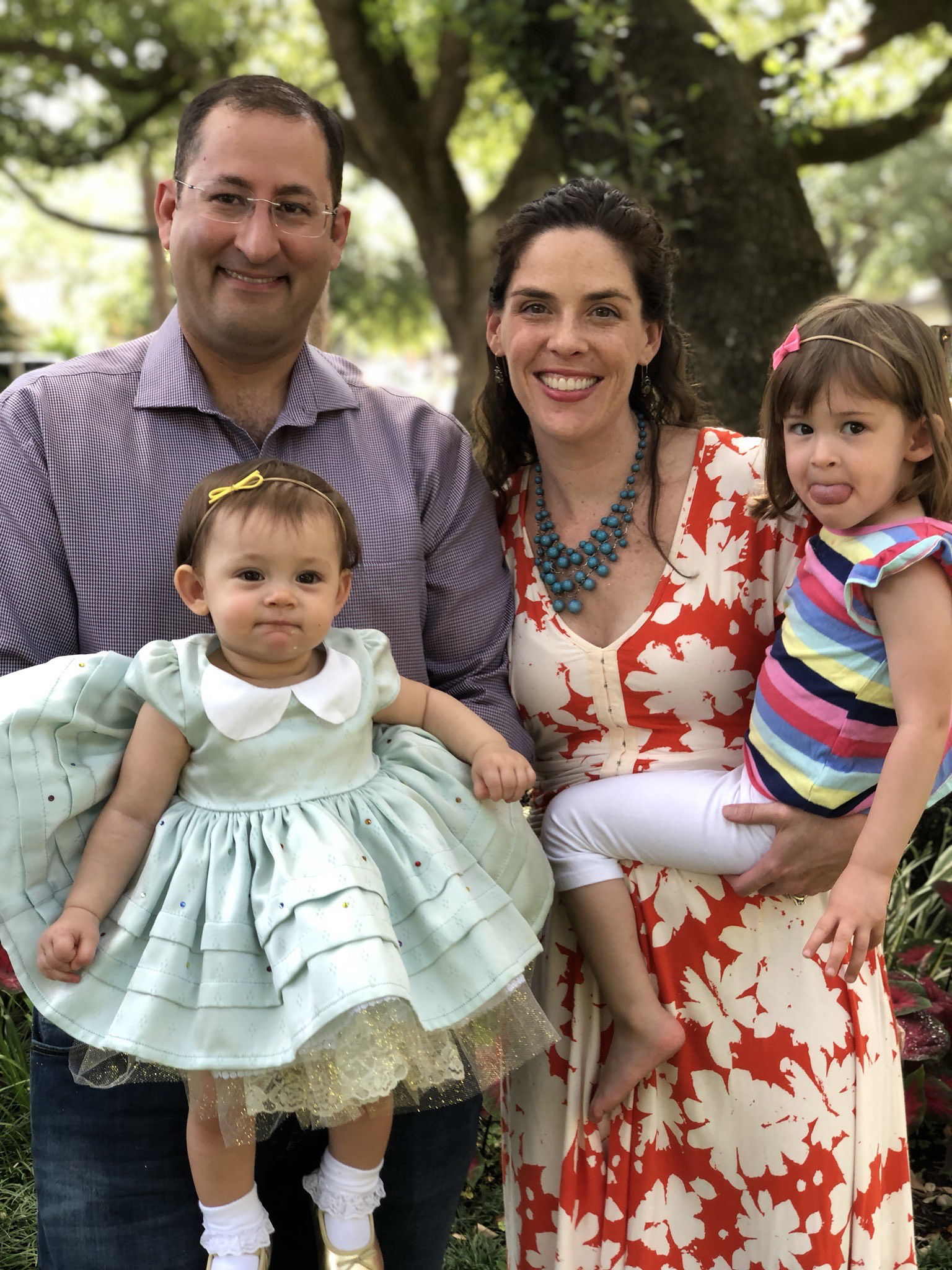 The Gilman’s story….
Thirteen years ago I was a Hoosier new to Houston and the to joys of Texas Country music when I met my husband who was a Mainer with a Texas-sized heart.

Before we began dating, he regaled me with stories of the best live music venue in Houston (including tales of a super fan named Vern) but failed to take the numerous hints that I would like to go with him.

I got tired of waiting and invited a friend to see Ellis Paul. Once he got up the nerve (the day before the concert!), I told him I was already going.  We finally had our first date the next weekend.  In preparation, I listened to Ellis’ “When We Begin.”  And that was the beginning.  I was smitten with him and the Duck.  Many more good memories at the Duck were ahead of us and now we get to share the Duck with our two daughters at the Christmas shows.  Thanks for the memories – both past and future.

“She said yes”…..Christine and Johnny’s story 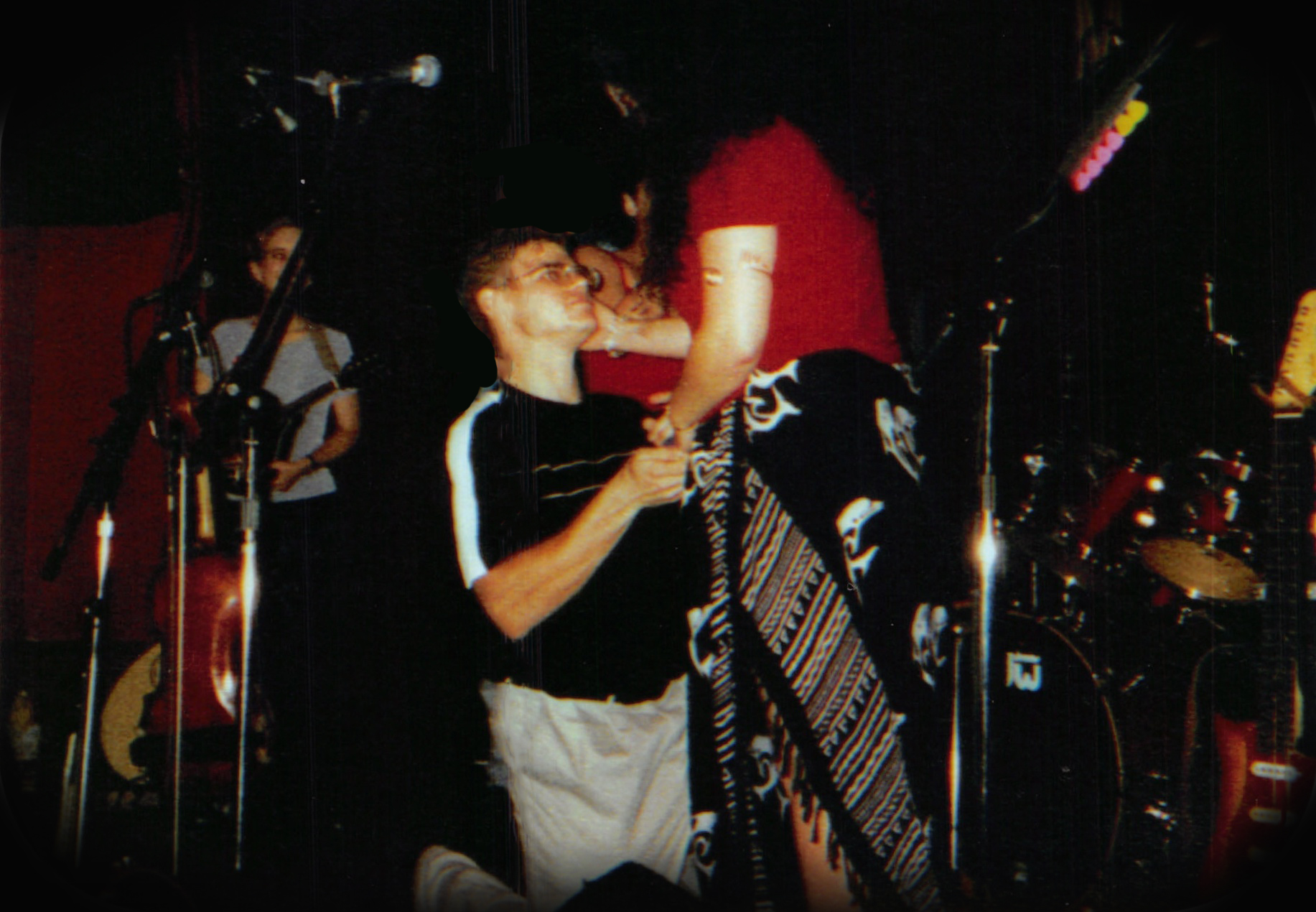 “She said yes on the third try” Johnny Peters and Christine Bradford met at Irish Sessions on December 1st, 1999. Christine was singing the Queen of Argyle. (We like to think that the Duck stage proposal clinched the deal.)

Johnny’s story.
We met at Irish Music Night some time last century. Because I was still too scared to talk to girls, a friend of mine gave her my number and got hers for me. On our first date she dragged me to a grocery store and we went shopping, but that was okay because she gave me a goodnight kiss on the first date.
Christine fell in love immediately, but I made her wait a whole six months before putting her on the spot in front of a full house at a Six Mile Bridge concert at The Duck.
I saved myself some money by borrowing a ring from her mother 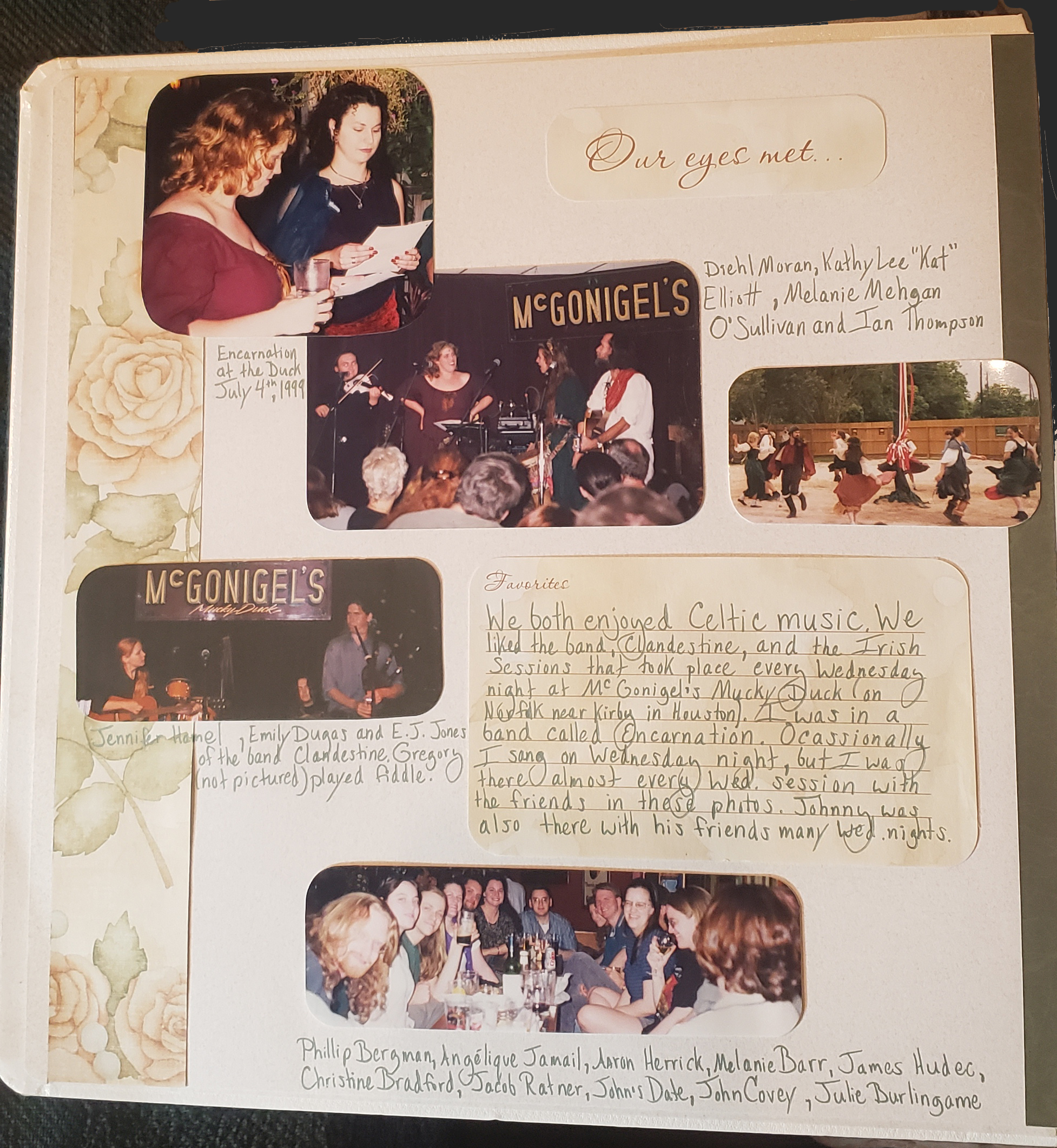 Christine’s brought their little red haired Lily for her visit to the Duck when she was a toddler and today Lily closed the circle when she performed with her HSPVA bandmates on the very stage where Dad proposed to Mom. 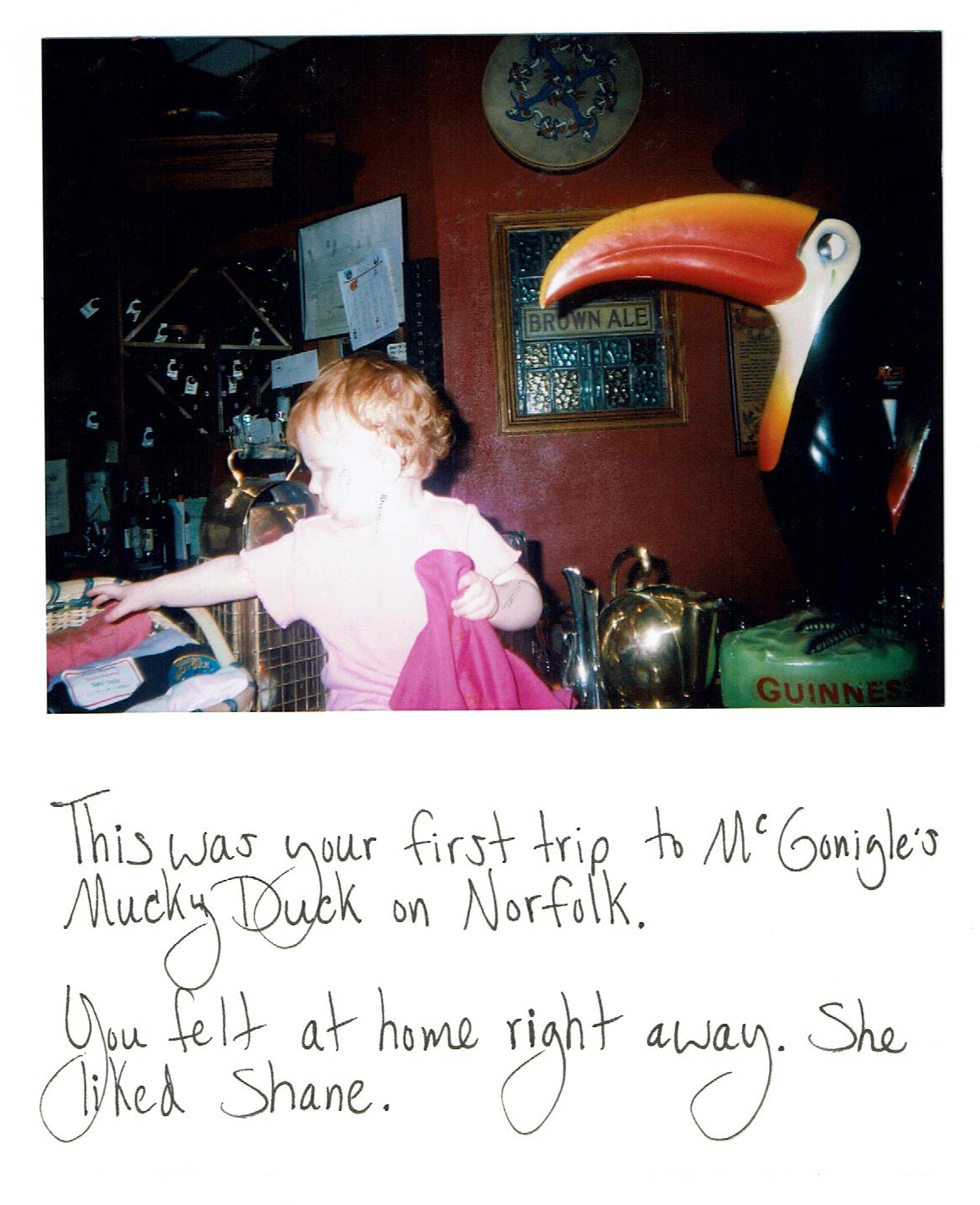 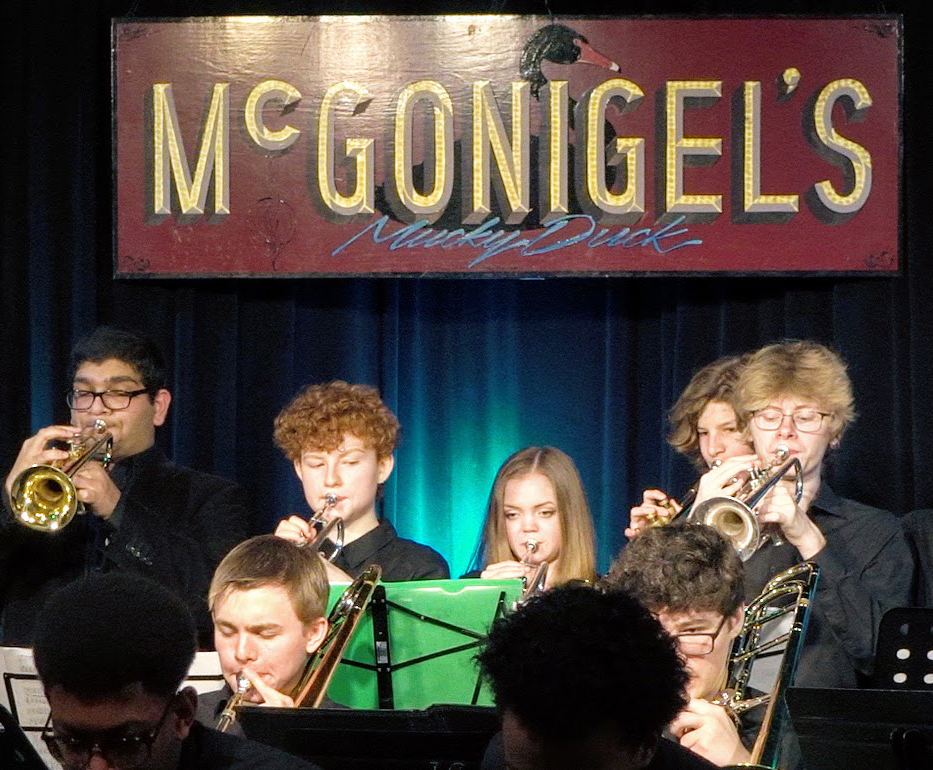