Before the ink had dried on our new five year lease (five years! wow we were optimistic, weren’t we?) we were in our new building getting ready to turn it into our very own public house and music venue.  Our new landlords had given us permission to remove the walls that had separated the space into four “insurance offices” and turn it into one big room which would better suit our needs.

Even though it was dusty and hard work it was still kind of exciting. We discovered so many interesting things…like when we pulled down the ceiling tiles.  You’ll never guess what was up there! No, no, there weren’t old tin cans filled with cash, although we have heard of that kind of thing happening, it didn’t happen for us.  No cash for us, instead we found miles and miles of phone cabling.  Really. Miles.
Now why, you may ask, why was there miles phone cable in the ceiling?  We had no idea.
were afraid to remove it without permission from the landlord. It looked expensive and permanent, but really weird. So we called for permission. As it turned out, he didn’t mind if we removed it all. They didn’t need it. It had belonged to their former tenants. “The insurance company?” I ask.  I thought I noticed a twinkle in his eye when he said  “yes, the “insurance office.”  Hmmm, that twinkle got me wondering.  What was I missing here?
Remember when I told you about the cool fort in the parking lot? And the impenetrable security door? And the fence all around 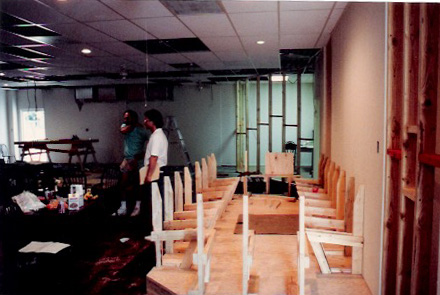 property? All clues. Clues to what I wasn’t sure, but clues they were indeed. We were so busy dropping Michael at school, going downtown for permits, going to Home Depot for all the stuff you go to Home Depot for and then picking Michael up from school we didn’t think too much about the former tenants until one day we got some of their mail.  Lots of mail. All from Las Vegas. “Aha
So this was when we learned that the little offices were set up to house the craps tables, poker rooms and roulette wheels. And the miles and miles of phone cable? Who knows. Maybe betting. Anyway, Vice had raided the “lodge” in December of 1989 and there it sat for four months waiting until we found it.  If you ask

me the next time you’re in, I’ll show you the spot on the front door where they used a battering ram to enter the building.

Questions, questions, questions …. where should we install the bar, kitchen and why in the world would gamblers want to have carpet in the bathrooms?  With many questions unanswered we took our sledgehammer, crowbar and set about our transformation.