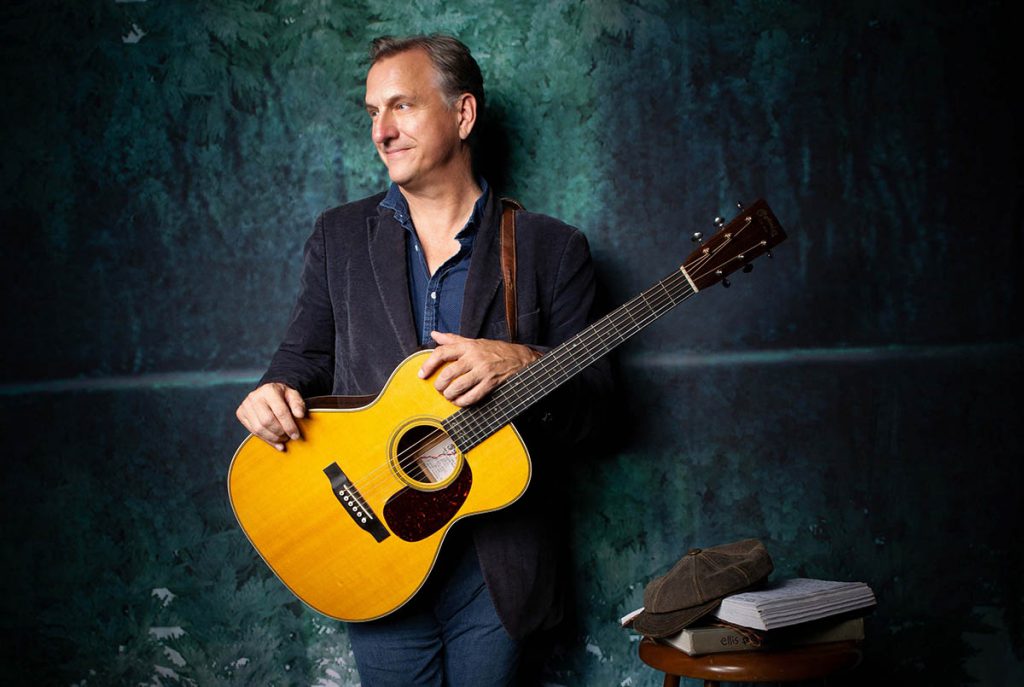 A troubadour, a singer/songwriter, a folky, and a storyteller — all are fair labels for this artist, but they do not quite suffice. However, the tattoo of Woody Guthrie worn proudly on his arm is a good starting place from which to grasp Ellis Paul, for it is from the Woody Guthrie tradition that he hails, and Maine as well. Joni Mitchell, Bob Dylan, and James Taylor are also listed among his influences, and their spirits seem to occasionally grace his work.

With an acoustic guitar in hand, he weaves intimate, provocative, and romantic tales of lives that were obviously witnessed by a most-talented voyeur. Based in Massachusetts, Paul has been called the quintessential Boston songwriter more than a few times and has garnered the recognition and awards to back up that claim, including a shelf full of Boston Music Awards.

Since coming onto the scene in 1993 with his independent debut, Say Something, Paul hasn’t slowed or weakened as a performer or a writer. Spending two-thirds of most years on the road has helped him perfect both crafts, with a lot of practice on-stage and a lot of people whose stories he retells in song. In fact, his 1994 album Stories proved enchanting enough to secure him a deal with Rounder Records and a national following of dedicated fans.

Over the years and albums, his songs have gotten more personal. He purposely turned the looking glass onto his own life for 1998’s aptly titled Translucent Soul as he publicly worked through the pain of his divorce. Following hot on the heels of 1999’s double-CD Live, the new millennium saw Paul’s song “The World Ain’t Slowing Down” featured in Me, Myself and Irene starring Jim Carrey.

His eighth studio release, a collection of previously unreleased tracks called Sweet Mistakes, arrived in 2001, followed by Speed of Trees (2002), a two-disc career retrospective (2006), a children’s record inspired by the birth of his second daughter called The Dragonfly Races (2008), and, finally, an all-new studio album, The Day After Everything Changed,

in January 2010. In 2012, Paul released his second children’s record, The Hero in You, which featured songs about Benjamin Franklin, Georgia O’ Keefe, Rosa Parks, and Thomas Edison, and other notable Americans that Paul deemed heroic. Chasing Beauty was released in 2014 and his 20th studio album, The Storyteller’s Suitcase, in 2019.

Rebecca Loebe is an award-winning singer, songwriter, and performer based in Austin, TX. Her mission is to create music and experiences that bring people together and help them feel their damn feelings.