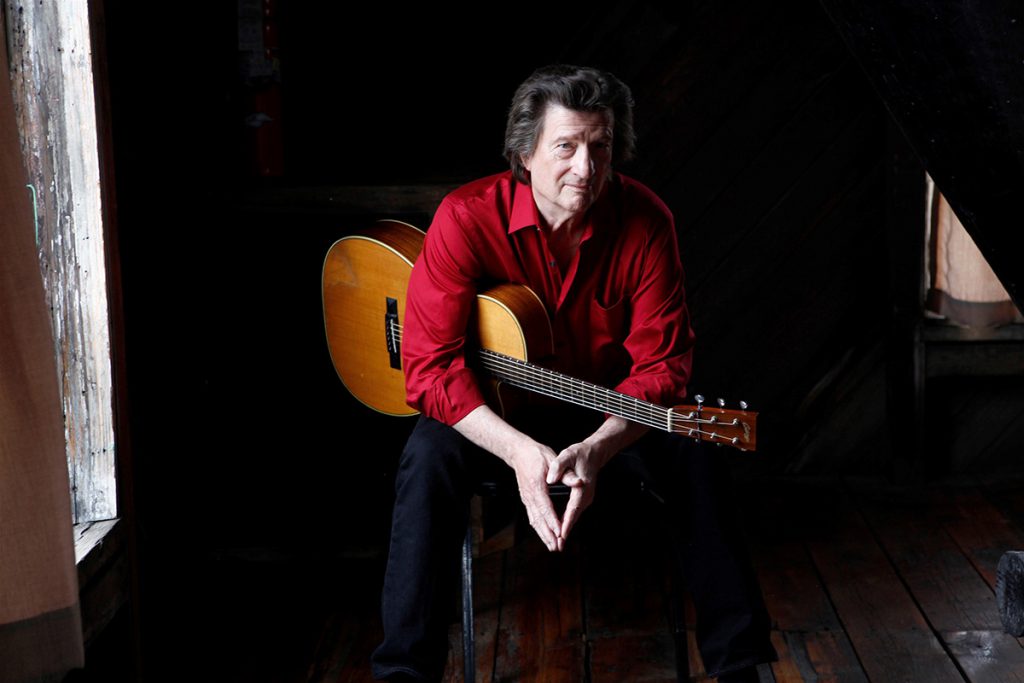 “Smither is an American original – a product of the musical melting pot and one of the absolute best singer-songwriters in the world.”—Associated Press.

Born in Miami, during World War II, Chris Smither grew up in New Orleans where he first started playing music as a child. The son of a Tulane University professor, he was taught the rudiments of instrumentation by his uncle on his mother’s ukulele. “Uncle Howard,” Smither says, “showed me that if you knew three chords, you could play a lot of the songs you heard on the radio. And if you knew four chords, you could pretty much rule the world.” With that bit of knowledge under his belt, he was hooked. “I’d loved acoustic music – specifically the blues – ever since I first heard Lightnin’ Hopkins’ Blues In My Bottle album. I couldn’t believe the sound Hopkins got. At first I thought it was two guys playing guitar. My style, to a degree, came out of trying to imitate that sound I heard.”

ASSOCIATED PRESS:  Wise words pour forth from Chris Smither – observations and aphorisms, similes and internal rhymes, run-on sentences and concise quips, all in a conversational flow. The careful construction of Smither’s lyrics is a thing of beauty and the bedrock of his bluesy folk music. Smither is an excellent acoustic guitarist and first-rate foot-stomper.

NATIONAL PUBLIC RADIO:  [Smither] taps his foot to keep the rhythm, much like the late blues legend John Lee Hooker. His finger-picked guitar lines are sleek, unhurried and insistent. And then there’s the voice – equal parts gravel and molasses.

ROLLING STONE:  Bathed in the flickering glow of passing headlights and neon bar signs, Smither’s roots are as blue as they come. There is plenty of misty Louisiana and Lightnin’ Hopkins in Smither’s weathered singing and unhurried picking. So fine.

MOJO (5 STARS):  Hundred Dollar Valentine is a thing of profound beauty; deep, sad, wise songs, allied to perfectly crafted arrangements, from a man who’s live long enough in darkness to address the big, heavy questions with a lightness of touch.

OXFORD AMERICAN:  It was that rhythmic push-and-pull, that New Orleans sensibility that made Smither stand out.

NEW YORK TIMES:  With a weary, well-traveled voice and a serenely intricate finger-picking style, Mr. Smither turns the blues into songs that accept hard-won lessons and try to make peace with fate.

MAVERICK:  Cast your mind back to the first time you heard Hank Williams, Big Bill Broonzy or JJ Cale and remember how good it felt. Think of the opening encounter with Leon Redbone or Leo Kottke. They say newcomers to Chris Smither’s brand of country blues-tinged southern folk experience those same emotions. It’s true.

UNCUT (UK):  Call Me Lucky careens confidently from lowdown acoustic blues to spry folk rock, riffing and jangling with a sense of urgency and purpose.

BLUES MAGAZINE (NL):  Smither remains one of those truly rare things, a writer and singer with a remarkable eye for oddities and references that cross genres from roots to jazzy underpinnings and blues.

THE AUSTRALIAN:  Stoical and sometimes nihilistic reflections on the meaning of life flow fluently from a gruff, world-weary voice that falls somewhere between Bob Dylan and JJ Cale. Groove is of the essence for this acclaimed guitarist, whose propulsive Delta blues-influenced finger picking is augmented by trademark foot percussion.

INDEPENDENT (UK):  Chris Smither may be Americana’s most underrated talent, offering acute observations about life’s bitter ironies in a baritone drawl as worn as antique leather, its weary tone belied by the sprightliness of his fingerstyle guitar.

MONTREAL GAZETTE:  With his Southern-drawl, tapping foot in constant motion and fingers pulling fluid blues patterns from his acoustic guitar, Smither is an engaging, sometimes intense singer-songwriter who can convert almost any audience he sits down in front of.

VANCOUVER PROVINCE:  … in the tradition of his influences such as Lightnin’ Hopkins and Mississippi John Hurt as well as his late contemporaries Townes Van Zandt, Tim Hardin and Tim Buckley.

WASHINGTON POST:  His songbook is overflowing with rollicking, clever blues-based folk tunes, and he has been a consistently engaging live performer for more than four decades.