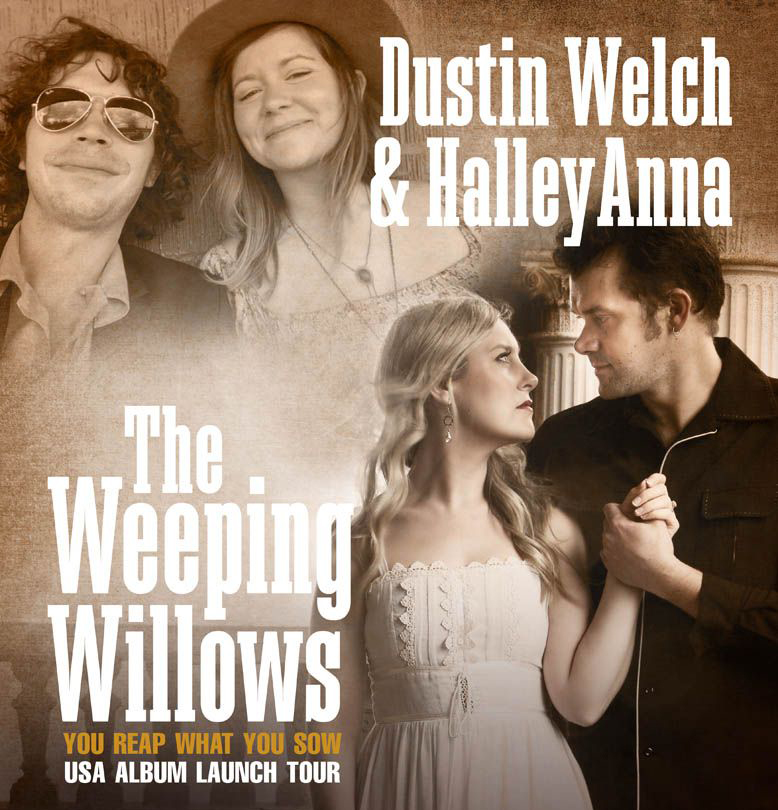 The Weeping Willows
3 x CMAA ‘Golden Guitar’ and 2021 Australian Folk Music and Music Victoria Award winners, The Weeping Willows (Laura Coates and Andrew Wrigglesworth) are a couple of old souls, steeped in Bluegrass tradition and draped in Gothic Americana imagery.  They regale their audiences with stories of sunshine and romance, God and The Devil, murder and decay.  That kind of description might make them sound like some carefully contrived concept-act but there’s something truly different about The Weeping Willows: they really mean it… 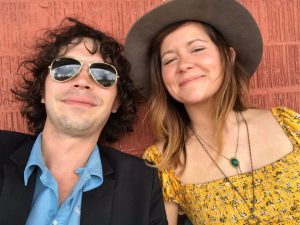 Dustin Welch
A Nashville native, Dustin grew up surrounded by writers, singers, pickers, and artists of allkinds.  At an early age, he was exposed to the literary value of song form, and formed his own unique style of storytelling.  Appalachian grooves and melodies coupled with lyrics, strange and beautiful.  He encountered solid recognition for his talent and hard driving music and lyrical style for his first two solo records Whisky Priest and Tijuana Bible, putting him into the upper realm of Austin rockers.  His long awaited third installment, Amateur Theater, was released in 2019.

Texas songwriting with some underworld imagery.

…this guy seems to be a very fully realized songwriter. He’s not working anything out here.

It sounds like he showed up knowing just what to do, and you better get out of the way so he can do it.” -Kim Ruehl, No Depression.

The highlight of his active schedule is hosting weekly songwriting and guitar workshop in SanMarcos for Armed Forces veterans suffering from post-traumatic stress for a program hefounded called Soldier Songs and Voices. It’s inspiring…it’s a beautiful thing.] www.dustinwelch.com

HalleyAnna Finlay
HalleyAnna has been studying the art of songwriting and performance for nearly three decades.  Her father, Kent Finlay, opened the legendary San Marcos, Texas singer-songwriter listening room, Cheatham Street Warehouse, birthplace for kindred spirits Terri Hendrix, Bruce Robison, Todd Snider and several others, HalleyAnna carries forward the spirit that has been embodied at Cheatham Street for decades: She writes, in the Townes Van Zandt tradition, simply “for the sake of the song.”

HalleyAnna Finlay sings like her songs were stamped on her heart at birth.  Evidence: The Country (2011).  HalleyAnna’s superb debut collection swaggers (“So Heavy”) and sways (“Fast Train”) with effortless elegance.  The album, which deftly spotlights her meeting point between Patsy Cline and Emmylou Harris, serves as a shining introduction to a skyward bound emerging talent.  High watermarks – particularly, “Back in Your Arms Again” and “Peace Is Lonely, Love Is War”– demonstrated HalleyAnna growing exponentially sharp as a songwriter.

All personify the literate storytelling so identified with the Texas music tradition and HalleyAnna has put her creative writing studies to good use following their footsteps.   Find further proof on her sophomore self-titled effort (HalleyAnna, 2013).  Americana all-star Bill Chambers produced the collection.  “Working with Bill is so easy and great,” HalleyAnna says.  “Bill came up and was here for the summer touring with his daughter Kasey and he had about a week-long window to make a record with me.  He brought this really nice microphone that Kasey used on ‘The Captain’ and ‘Barricades and Brickwalls’ and we did vocals pretty much live.  We cut the album in five days in the Woodshed in San Marcos.”

HalleyAnna has been busy writing new songs and enjoying the married life, working on preproduction on her third release and finally getting back into the studio after losing her trusted mentor and father Kent Finlay.  “Any time I’d go through a heartache growing up, my dad would say, ‘Well, you’ll get a good song out of it,’” HalleyAnna says. “Sure enough, I really did, and here we go again.” Her n ew material explores more than just her own personal experiences in the last few years.  Becoming a mentor to others and some epic co-writing has led her to discover so many more ways to write songs – come see for yourself.