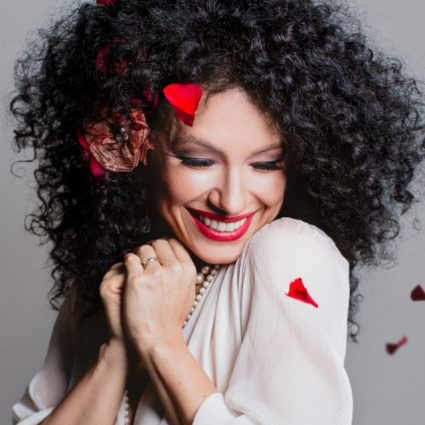 Venezuelan Jazz vocalist Raquel Cepeda and her band will be presenting an electrifying evening of Latin Jazz at Mucky Duck, Houston.

Unique in her style, Cepeda’s last album ‘Passion’ was nominated for the 2020 Pepsi Music Awards as ‘Best Jazz Album’ and it remained in the #1 position of the Latin Jazz Chart at the Roots Music Report for 8 consecutive weeks.

Cepeda is one of Houston’s treasures. She has played at important stages including the Miller Outdoor Theater and the Match Theater, and has performed in São Paulo, Rio de Janeiro, and Caracas. She has also shared the stage with iconic American Jazz figures like Ellis Marsalis and Delfeayo Marsalis.

Cepeda, a former Geological Engineer infused with a broad cultural diversity and fluent in 3 languages, captures and integrates the best rhythms and sounds from Latin America with the aesthetics and freedom of Jazz, conveying with her ample vocal range and unique interpretation a mesmerizing story in every song.

Her quintet is composed by Barry Sames on piano, Thomas Helton on double bass, Adriano Santos on Drums, Cassio Duarte on Percussion, with Cepeda on vocals.

“Without any doubt, one of the best albums of the year with the Latin Jazz label”

“Passion is absolutely an album to die for”

Raquel Cepeda is a Jazz Singer and Songwriter who brings the best styles and rhythms from around the world to the refined language and aesthetics of Jazz. A highly regarded singer who has shared the stage with Jazz legends such as Ellis and Delfeayo Marsalis. A performer whose interpretative quality, approach to story telling, and multi-cultural style has the ability to reach and move the hearts and ears of the most demanding and diverse audiences. She was featured at the 1st Latin Jazz Festival of Houston in 2018, as well as the Brazilian Food and Music Festival in 2019, and has performed with the Kingwood Pops Orchestra.

Raquel performs extensively in Houston where she resides, producing important concerts including her Annual “Jazz on Valentine’s” held at the Match Theater on Valentine’s Day, and is highly requested for many public and private performances.

Fluent in various languages such as English, Spanish, and Portuguese, Raquel has performed abroad in Caracas, São Paulo, and Rio de Janeiro.