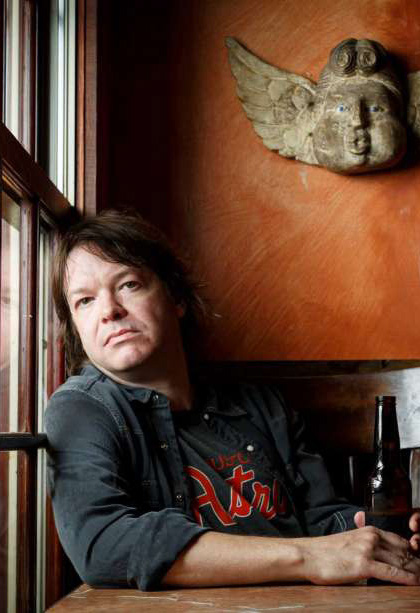 Mike Stinson can write songs in his sleep….no really, check out Walking Home In The Rain from his fourth and most recent album Hell And Half Of Georgia. “Well that only happened once but yeah it’s true. I woke up with that song fully formed playing in my head. No idea where it came from.” General consensus is that Mike’s blue collar songwriting ethic earned him that freebie. That kind of ‘luck’ comes from putting in the time. Here’s a glimpse at what that time has looked like. Raised in Virginia, schooled in DC, Mike moved to Los Angeles where eighteen years made him a veteran of what he calls “the trenches of bar band warfare.” The last six years have found him based in Houston and barnstorming the roadhouses of Texas week in and week out.

Along the way he has written his very own version of the American songbook and developed an expansive live show that “has taken country and rock and boiled them down to their essence before injecting everything with the kind of ju-ju that Gram Parsons died for.” (Bill Bentley, The Morton Report) Critical acclaim has followed. Los Angeles Magazine named him Best Country Artist (2004), The Houston Press awarded him Song Of The Year (2010), Texas Music Magazine named him one of their Artists of The Year (2012) and one of their Records of The Year (2013), and The Houston Press named him Best Country Artist in each of the last two years (2014, 2015). But perhaps the more significant mark of Mike’s creative success is the respect and admiration he’s earned from a large songwriting community. His songs have been released on albums by Dwight Yoakum, Billy Bob Thornton, Tony Gilkyson, Jesse Dayton, Brian Whelan, Folk Uke (featuring Willie Nelson), Austin Hanks and Larry Bagby.