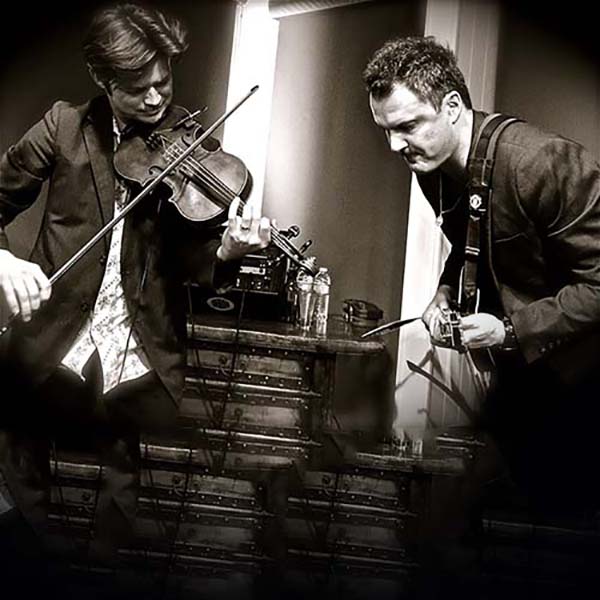 Kym Warner is a founding member of The Greencards. Originally from Australia, the band formed in Austin, TX and gained national attention when they supported a multi-state tour with Willie Nelson and Bob Dylan. The Greencards are favorites on the festival circuit with appearances at MerleFest, Grey Fox, Austin City Limits, SXSW, Telluride, Bonnaroo, Telluride, Lollapalooza, and the Cayamo cruise to name just a few.

Kym has penned many of the tracks on The Greencards five studio albums. Two of his instrumentals have been honored with Grammy nominations. Last summer’s release, The Brick Album has become a fan favorite and featured two of the band’s musical heroes on separate tracks: Sam Bush and Vince Gill.

Warren Hood began playing the fiddle at the age of eleven. He attended Berklee School of Music where he was awarded the school’s top honor – The String Achievement Award. He has since gone on to win numerous awards for string virtuosity and has been recognized three times as String Player of the Year in the Austin Chronicle Music Poll. The son of Austin, TX music legend, Champ Hood (Uncle Walt’s Band, Toni Price), Warren has become an accomplished multi-instrumentalist, songwriter and singer. He has toured extensively as a member of acclaimed Bay Area band The Waybacks (featured on NPR) who accompanied former Grateful Dead founder Bob Weir and as violinist for world-renowned recording artists, The BoDeans. He has also performed and/or recorded with such noteworthy artists as Lyle Lovett, Joan Osborne, Emmylou Harris, Ben Kweller, Little Feet, Elvis Costello, Susan Tedeschi, Gillian Welch, and Alejandro Escovedo.

“The cream always rises to the top, and there are young performers out there who will find their audience [such as] Warren Hood, a terrific songwriter and singer.” ~ Lyle Lovett

“Hood has style to burn, with a knack for composing songs as ageless as they are pleasing to hear.” ~ Margaret Moser, The Austin Chronicle

https://youtu.be/milsrGxU5_k (Waiting for a Train)