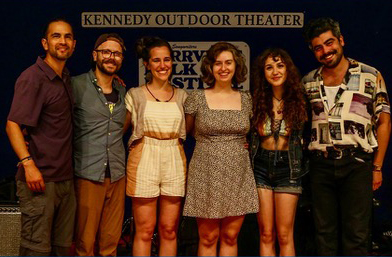 The Kerrville Folk Festival each year invites songwriters to submit two original songs for Kerville’s Grassy Hill New Folk Songwriting Competition.  Of the 750 entries in 2022, 24 finalists were selected and invited to present their 2 songs at the 2022 Kerrville Folk Festival.  A panel of professional touring songwriters selected the 6 award winners who will present the concert at the Mucky Duck on March 21st.

•    Javier Jara (Austin, TX) Originally from Ecuador, Javier holds both Bachelor of Music and Master of Music degrees.  As a young boy he honed his musical roots playing classical guitar and singing Latin American folk music at family gathering.  Javier now writes music as a form of both political and social activism.

•    Kyle Rasche (Alto, MI)  Kyle Rasche is a Michigan singer-songwriter who has released music as “Chain of Lakes” since 2010.  Kyle has carved his place as one of West Michigan’s most dependable songsmiths of the poetic, soul baring sort.  2021 saw his foray back into the songwriter world, with a pile of new songs and an updated list of accolades.

•    Jean Rohe (Brooklyn, NY) Jean Rohe grew up in a household where music making and storytelling were acts woven into the social life of her family and friends.  Her writing and performance style are the product of 20 years of experimentation and practice, learning on her feet as a side person and band leader in New York’s wide-ranging music communities.

•    Calista Garcia (Arlington, VA) Folk rock singer songwriter Calista Garcia delivers flairs of Latin, blues, roots and pop, all tied together with introspective lyricism. Calista was a contestant on NBC’s The Voice.  She has won numerous awards and is a prolific songwriter who plays guitar, piano, ukulele, bass, mandolin and harmonica.

•    Sadie Gustafson-Zoot (Nashville, TN) Raised in a liberal Mennonite community in Indiana, Sadie grew up playing music and attending quilt auctions with her folk musician parents.  Leaving home, Gustafson-Zook moved to Boston where she studied jazz voice at the Longy School of Music/Baird College.  Sadie took a winding path of musical influence which is evidenced by the myriad of styles referenced in her work.

•    R. O. Shapiro (San Diego, CA  ) R.O. Shapiro prides himself as a purveyor of original Americana music, carefully crafted and soulfully sung. Originally from Long Island, NY, he later settled down in Austin, TX, where he developed a full-band, electrified sound, as heard on his 2021 release King Electric Sessions. He describes that sound as a little bit of New York swagger and a touch of Texas twang. He is currently based in San Diego, CA, and regularly tours solo in the Northeast and Pacific Northwest.