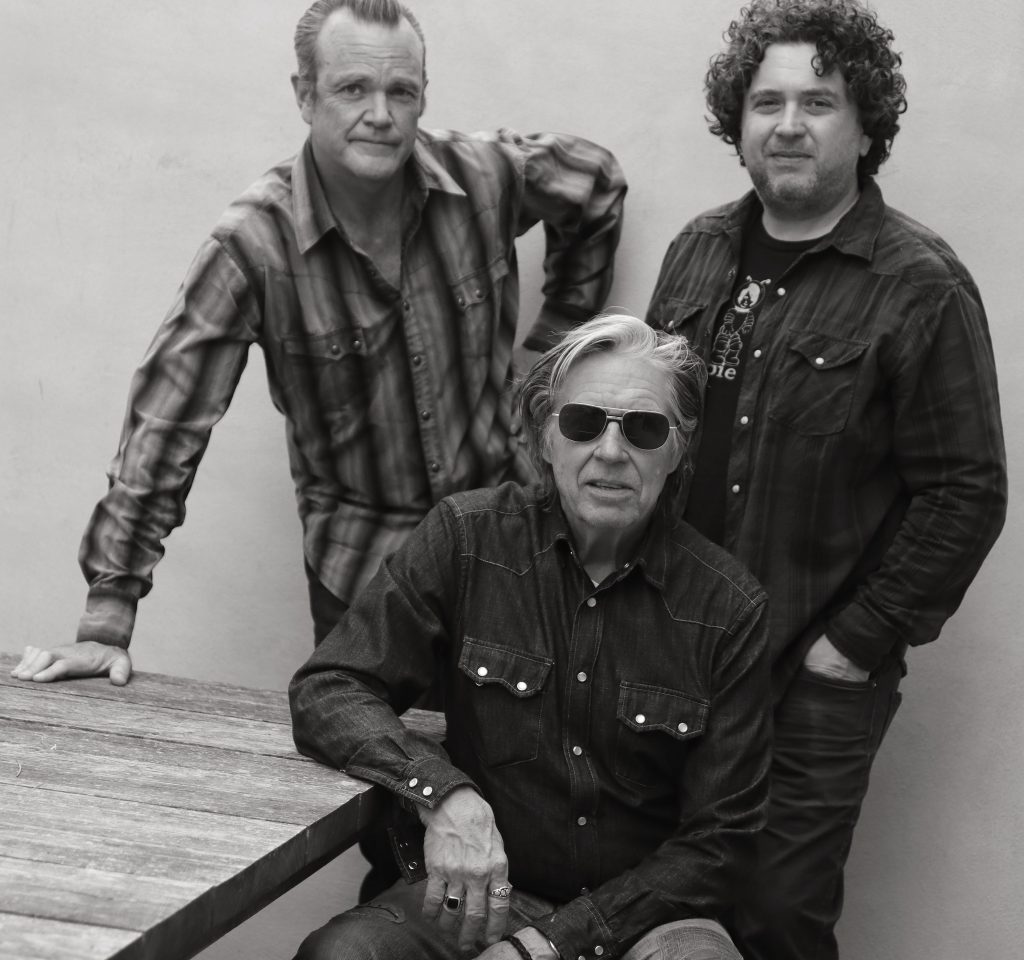 The John Doe Folk Trio – Fables in a Foreign Land

THE JOHN DOE FOLK TRIO FABLES IN A FOREIGN LAND

John Doe: Punk rock pioneer with X, songwriter, poet, actor, solo artist, published author…folk musician. “I guess ‘Fables in a Foreign Land’ is my version of folk music. It started by being sick of musicians that play too much and having to orchestrate or arrange songs. ‘What if it was just less?’ Everyone says less is more, but you have to figure out for yourself what that means. I didn’t do a deep dive into folk music and concern myself with what was ‘traditional,’ it was just an outgrowth of trying to strip the songs down to the basics.

Turns out Doe didn’t apply the approach of a musicologist. He didn’t need to since his first records were folk sides – not just Bob Dylan or Phil Ochs, but names such as Elizabeth Cotten, Woody Guthrie, Leadbelly, and Cisco Houston. He also notes his and fellow X member Exene Cervenka’s shared love of both the Delmore Brothers, Louvin Brothers, Ray and Ina Patterson and various string bands. Of course, country music was always a part of X’s musical tapestry and their songs have always told stories. “Yeah, whether it’s ‘Johnny Hit and Run Paulene,’ or even on this latest record [last year’s Fat Possum release, Alphabetland], the song that Exene wrote, ‘Angel On The Road’ they all tell a story.” With Fables in a Foreign Land, the debut release from The John Doe Folk Trio, his tales are now set in the pre-Industrial Era. “All of these songs take place in the 1890s.

There’s a lot of sleeping on the ground, a lot of being hungry, a lot of isolation. All of that fits into the kind of isolation and lack of modern stimuli that I think people started rediscovering during the pandemic lockdown: realizing that as parts of your life start getting taken away, what’s important and what you live for becomes paramount.” And though many of the 13 songs were written over the last three years, the sound was born in loose weekly backyard jams on Kevin Smith’s patio. Doe called the Willie Nelson And Family upright bassist on Tax Day 2020, as the country legend’s seemingly endless tour schedule ground to a complete halt – probably for the first time ever– due to the pandemic. “I called up Kevin and we just started playing on his patio on Tuesdays, just for something to do.

And after about a month, we realized, ‘Holy shit! This is the first time we’ve been able to do this just for the hell of it! We’re not doing it for a tour, for a record or a show.’ We’re doing it just to play. Then we invited our drummer pal Conrad Choucroun out, I wrote more songs, and eventually the project became more focused. This resulted in an odd shuffle style, somewhat like the Hot Club Of France minus Django Reinhardt’s beautiful lead guitar. “Because I can’t play that good!” he laughs. There are also elements of conjunto on tracks like “Guilty Bystander” and “El Romance-O,” plus ancient cowboy songs. “I give Conrad and Kevin a lot of credit for developing the sound.

But it wasn’t because we were trying to be something. It was because we didn’t want to be something else that already existed. The amount of time we spent working together, the three of us became a sound. And we recorded the sound the same way we came up with it. Nothing was amplified. We were just sitting in an area the size of these two picnic tables, just singing and playing.

We did that for months. So, when it came time to record, I looked at a bunch of studios and decided on (Spoon drummer) Jim Eno’s, because of the high ceilings and mic selection and such. He knows his gear. He has an old style (of recording) without being too traditional. We just set up in a corner the way we would set up on Kevin’s patio. Dave Way (producer and engineer) put up loads of microphones, didn’t use headphones, and said, ‘Okay, bitches! This is for real!’

Because of the setup, we couldn’t re-do vocals or parts. We did edit between takes. It’s a bit like old jazz records, like a Rudy Van Gelder, Blue Note record.” Choucroun and Smith weren’t the only keys to how these Fables sound. Guests include Carrie Rodriguez and Texmaniacs’ accordionist Josh Baca while Cervenka and Shirley Manson (Garbage) co-wrote “Destroying Angels” with Doe. “When Shirley Manson says, ‘You wanna write a murder ballad?’ You don’t say, ‘Oh, no! I couldn’t do that! I’m busy!’,” laughs Doe.

“It’s an experiment that went very right. The term ‘death caps’ is another term for poison mushrooms… oh, and there’s more blood.” Los Lobos’ Louie Perez contributed Spanish verses to “El Romance-O,” a song which came to Doe in a dream. Perez added more dimension to the character by adding his distinctive lyrics to the track. “The subject of the song is so full of himself that he believes he can choose his own nickname,” explains Doe. “We all know, you can’t do that.” Outsider country polymath Terry Allen collaborated in writing “Never Coming Back,” as Doe explains of the lead track, “This song starts the record for a reason. It embodies the spirit of what’s to come. This song begins a journey that will be without comfort, where you are running from something dark, that is approaching fast. You can’t go back because there’s nothing to go back to.” “It was a lot of projection and maintaining a character’s voice.

In ‘Traveling So Hard,’ I asked myself If you had been going from one place to another for a week or more, what would you look forward to the most? It has humor, too. I feel like Woody Guthrie played some part in that song as well: ‘I’ve been having some hard travelin’ way down the road….’ I’d also say that my horse wrote the third verse: ‘That mare didn’t care one way or the other.’ If you’re so stupid or drunk to fall off your horse? That’s your problem! [laughs] The horse doesn’t care! The horse is just glad to have that dead weight off her back. There’s humor amidst the dire circumstances of the isolation. Doe deals with spirituality on this record. “I’m not religious, but I’ve become more spiritual. Maybe that’s finally making its way into the creative process on a song like ‘After The Fall’: ‘He held his hands high/He prayed to the sky.’ Mortality is also a strong undercurrent on songs like ‘Missouri’, ‘The Cowboy and the Hot Air Balloon’ and ‘See The Almighty’.” While the title of the album hints that the songs contain some sort of moral, Doe is quick to question that notion: “I hope the records relates to people. I hope that people can see themselves within the stories I am telling. But I don’t know that there are any ‘lessons’ and even though they are all made up, I’m not sure they contain mythology.”

Nor is Fables quite a concept album: “I feel as though it could be a single man or a woman who is the hero of this journey, starting from having to leave the family home and then ending up at the Pacific Ocean. By the end in ‘Where The Songbirds Live?’ they’re at the ocean, and they’re thinking, ‘Well, maybe that’s where I’m meant to be. And I’ve finally found some peace.’ Along the way, there’s dead people and flight and pursuit. But during the journey, they hear about the story of ‘The Cowboy and the Hot Air Balloon and they hear about the ‘Destroying Angels’ story.

Those aren’t the protagonist’s experiences—but they hear the stories.” “I was trying to prove something to myself, that I could make something more cohesive and stay true to it,” Doe says, finishing his coffee and absentmindedly shifting his car keys in his hand. “We may have nostalgia for the ‘50, ‘60s, ‘70s or ‘80s. But I think someone who’s ten years older than we are, had nostalgia for the ‘30s or the ‘20s.

But what about someone our grandparents’ or great-grandparents’ age? They would have nostalgia for the 1830s, when you could just have room to live. Nowadays, we’re think about how they’re tearing down singlefamily homes and putting up these condos built right to the edge of the property line. That’s fucked-up. But I’m sure when they were putting in these ‘50s subdivisions, some of the old ranchers were thinking, ‘Isn’t that a bitch? There was beautiful farmland there, and they’re just putting a buncha goddamned houses on it!’”

“That’s perspective. It’s not just thinking about who you are and how you’re living. The joy for me is doing the research and putting yourself into the place. It’s just as rewarding as when you get something out of it. When you get a song, when you get some lyrics, when you get a poem or whatever it is? That’s cool.” “But sometimes,” he says, getting up to leave, “it’s putting your head into that place that’s also rewarding.”