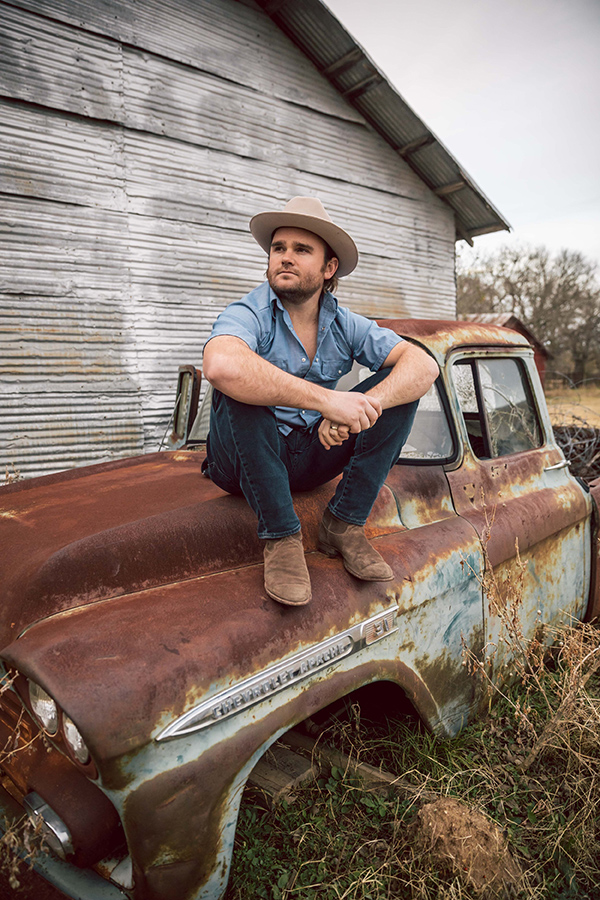 “I could use a shot of confidence to get a word in edgewise, I need to see that silver lining, in those dark and stormy skies, and pray I catch that feeling that I used to know back when, back when I never knew I’d ever need a second wind,” John Baumann sings on “Second Wind,” a deep cut from his forthcoming album, Country Shade. After having a conversation with the singer-songwriter, it’s evident that he tends to look at things with a glass-half-full mentality-complemented by a deeply-ingrained dose of ambition. He is curious how time passes in its unknowable and ever-interesting way, and he’s ready for what it’s bringing next for him.

“‘Second Wind’ is about digging deep and finding the next gear when you’ve lost interest or motivation,” John says about the track. “It’s about the times when I feel like nothing is moving forward, but ultimately really about anyone struggling to get up and get back on the horse.”

It’s a familiar sentiment to most anyone who’s felt like they’re teetering on the precipice of taking their next step, making their next leap out into the world. John has had a busy last few years – he’s a member of The Panhandlers, with fellow Texans Josh Abbott, William Clark Green and Cleto Cordero, and signed on with The Next Waltz, the Texas-based brainchild of legendary songwriter Bruce Robison, for management. He’s also continued to prove himself as a promising songwriter within his home state and beyond its borders, with Kenny Chesney recording “Gulf Moon” for 2018’s Songs for the Saints.

Recorded at Modern Electric in Fort Worth, Texas, Country Shade offers a tried-and-true reverence for John’s influences, including Texas stalwarts like Guy Clark and Robert Earl Keen. But it’s distinctly his viewpoint: a steady-picked acoustic guitar accompanies the introduction to the album: “The Country Doesn’t Sound the Same,” a true-to-life account of changing scenery and soundtrack.

“I think there are two primary narratives on the album,” he says. “The primary one echoed in the first and final track, is about the changing state of rural America.”

“My grandparents’ ranch has been in our family for 100 years. It’s in Lockhart, Texas, on a rural patch where rolling plains meet Blackland prairie. There’s been so much development the past few years, with strip malls and a toll road moving in, to a potential landfill going in right behind the property. They’re protest songs, in a way.”

Otherwise, throughout its 12 tracks, Country Shade heavily focuses on comings and goings: of friends, loved ones, relationships. Time.

“Fool’s Crusade” is extravagant in its examples of love-slaying a dragon, taming a beast, tearing down walls-but, that is what unconditional love is, after all. There are also the clearest hints of how John was influenced by ’90s rock.

“Daylight’s Burning” and “If You Really Love Someone” focus on the other side of things, the end of romantic relationships, from some that seem all-consuming and others that can take quite a while to finally tie up their loose ends.

While both primary narratives find their writer taking a deeper look, the album is not all heavy by any means. “We added a mellotron at the beginning of ‘Next Ride Around the Sun’ and some amusement park sounds,” John says. “I hope it sheds light on how some of the chaos of life can be unimportant.”

“Sunday Morning Going Up” is a play on Kris Kristofferson’s “Sunday Morning Coming Down,” with an emphasis on celebrating hard work, enjoying the here and now, and appreciating what you have. “I think of the Sunday mornings that are actually Saturday nights-the hours after midnight on Saturday, when you’re out with friends, reveling in and appreciating the good times.”

“Homesick for the Heartland” recalls a sunny summer day with the windows down, full of innocence and nostalgia. “I always envisioned a little slice of heaven as a family that lives in rural Kansas, with warm summers, time spent outdoors counting stars, and tried to convey that homesickness for that idyllic time in this song.”

“Flight Anxiety” offers a dizzying account of — well, exactly what it sounds like: “I don’t love flying. I really don’t like flying in small planes, and I hate flying over the ocean, and I love writing in a tongue in cheek style.”

“Here Today, Gone Tomorrow” is a call for apologies when they’re necessary, echoing the album-wide importance of appreciating loved ones when you can and never leaving problems unresolved or a kind word left unsaid.

“Grandfather’s Grandson” bookends the album, cementing John’s place in the world as someone who values hard work, building a future and loving the places and people in the world that really matter.

“I think one of the best feelings in the world is when you’ve made an impact on somebody’s life,” he says of recording the album and its hopeful impact. “It gave me encouragement to record some of these songs I’ve been playing live for a while. Time is fleeting, and how important it is to do what you can, while you can.”