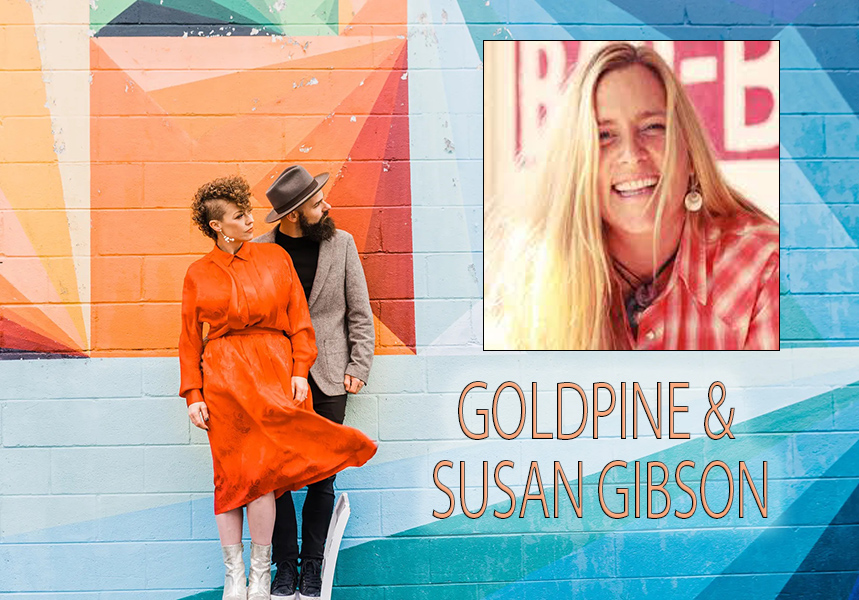 Americana act Goldpine was built by married couple Benjamin and Kassie Wilson (formerly called “My One and Only”).  From festivals like 30A Songwriting Festival and Bristol Rhythm & Roots Reunion to listening rooms throughout the United States, Goldpine has been offering their own brand of raw Americana to audiences large and small.  Finalists in the Kerrville Folk Fest 2021 New Folk Competition, the duo’s bold harmonies are clearly a channel for their highly charged songwriting.  Exposing the pains of severed relationships and unearthing the pursuits of love and purpose, Goldpine is cathartic, moody, raucous, and relevant all wrapped into one. Touring since 2015, they have been lessening the gap between music and the audience by disclosing their stories behind the lyrics at every venue along the way.

“…a melding of raw acoustic music with meaningful lyrics that paint a picture of their and our journey.” -Eric Dahl, host of Fox 17 Rock & Review Radio & TV

Susan Gibson knows all about blessings. Roundabout 28 years ago, she wrote herself a wish that grew up and went off on its own to become one of the biggest country songs of all time. Smiling at its success from afar, Gibson went on to happily live her own best life, free to hit the open road with a van full of happy dogs and a heart full of songs to share with attentive audiences across the country — and all the room in the world to “make the big mistakes” that a wide-eyed dreamer kinda gal could ever ask for.

All that said, though, Gibson is not a lives-in-la-la-land kinda dreamer. Blessed as she’s been, the award-winning songwriter also knows all too well that in the real world, sometimes there’s just no avoiding “the hard stuff.” Mind, not the kind she consciously swore off way back on Valentine’s Day, 2010; after nine years of humble sobriety, it’s easy enough, relatively speaking, for her to resist the temptation of a bottle of wine at a friend’s table or politely decline the occasional unasked-for drink sent to the stage by a fan. But positive life choices and willpower alone offer no proof or protection against the kind of knock-you-on-your-butt shots that life itself can serve up on the regular. The best you can do, she’s learned, is take each hit as it comes, get back up again, and try to find your wits and center of gravity before the next wallop lands. Because as sure as hearts break, van transmissions fail, and loved ones (both two- and four-legged) pass on, you can always count on another one coming.