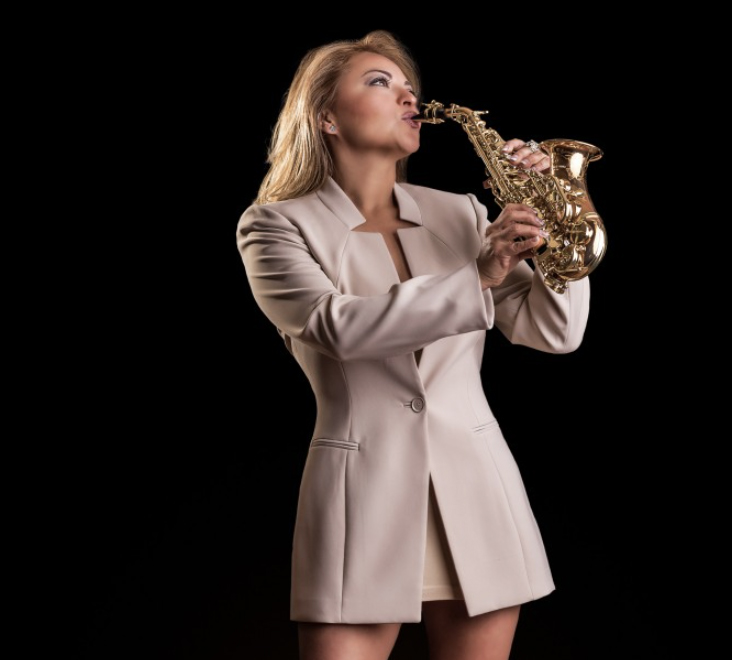 Evelyn Rubio – the blues rock loving sexy sax player vocalist that delivers both ambiance and a message from stages around the world. From the moment this lady takes the stage to the very moment she leaves there is both a room full of anticipation and then fulfillment in the air.

Audiences love Evelyn. In a recent press, radio, and venue tour in Europe Evelyn had the distinct pleasure to perform with The Black City Band in multiple cities. On every stage along the way the audiences were shouting bravo and encore, women were dancing at their tables, it was pure joy night after night. Over all, the multi-talented singer/sax player debuted in Europe and met with music industry dignitaries in three countries. Looking back it would have been almost impossible for this lovely lady from the barrios of Mexico City to envision reaching the big stages around the world. It all began with Evelyn being introduced to the stage as a very young girl.

She also appeared in lead children’s television programs where she performed as a singer, dancer, actor and later came musical theater where she toured as the lead role (Mary Magdalene) in a Canadian production of Jesus Christ Superstar. Equally important at the very same time, was her growing interest in American blues, soul, jazz, rock and R&B and of all instruments, the saxophone. (She now plays the tenor, alto and soprano).

After Jesus Christ Superstar, Evelyn would leave the stage and tour with a rock band in Mexico honing her skills on the sax and building those famous musical chops that everyone in the business raves about. She would also divide her time with a ten piece orchestra in Mexico City so that she could take care of her mother and family. Evelyn’s range combined with her passion for the arts would soon be delivering meaningful, contemporary music and Evelyn knew that if you wanted to grow musically America is the place to be. This is where Evelyn would meet Mr. Calvin Owens, in Houston Texas USA, just a short time after arriving in America.

Thanks to the famed rocker Al Staehely (Spirit) she received a chance and audition to perform for Mr. Owens who had been B.B. King’s band leader, composer, and lead trumpet for many years.   Almost on the spot he offered Evelyn a five year, five CD record deal with his Sawdust Alley Record Label. From there, she began recording and performing as a front person vocalist and sax soloist with his 18 piece orchestra. It was then that Calvin along with a host of other music industry decision makers would soon learn that Evelyn not only performed well but she writes touching, soulful, right to the heart songs as well.

Evelyn and Calvin had finished their first album when he became ill and passed. She had the honor of singing to him at his bedside just before. As chance might have it, Evelyn would meet and record an album with Mr. James “Boogaloo” Bolden who was B.B. King’s band leader and also lead trumpet for thirty years. She performed with Mr. Bolden and are close friends. She went on to record the album “Hombres” in two separate versions, one in English, one in Spanish.

The album went on to debut on the Billboard charts at #1 Latin Pop, #3 Top Latin and #6 Blues. In an album to be released this May, Evelyn will deliver Al Staehely’s “He Did Me Wrong, But He Did It Right” along with other songs in both English and Spanish. She tested the release on a unsuspecting audience at the premier listeners room, The Mucky Duck, and just as in Europe the women in the audience went crazy over not just the lyrics but the sultry delivery of the song.