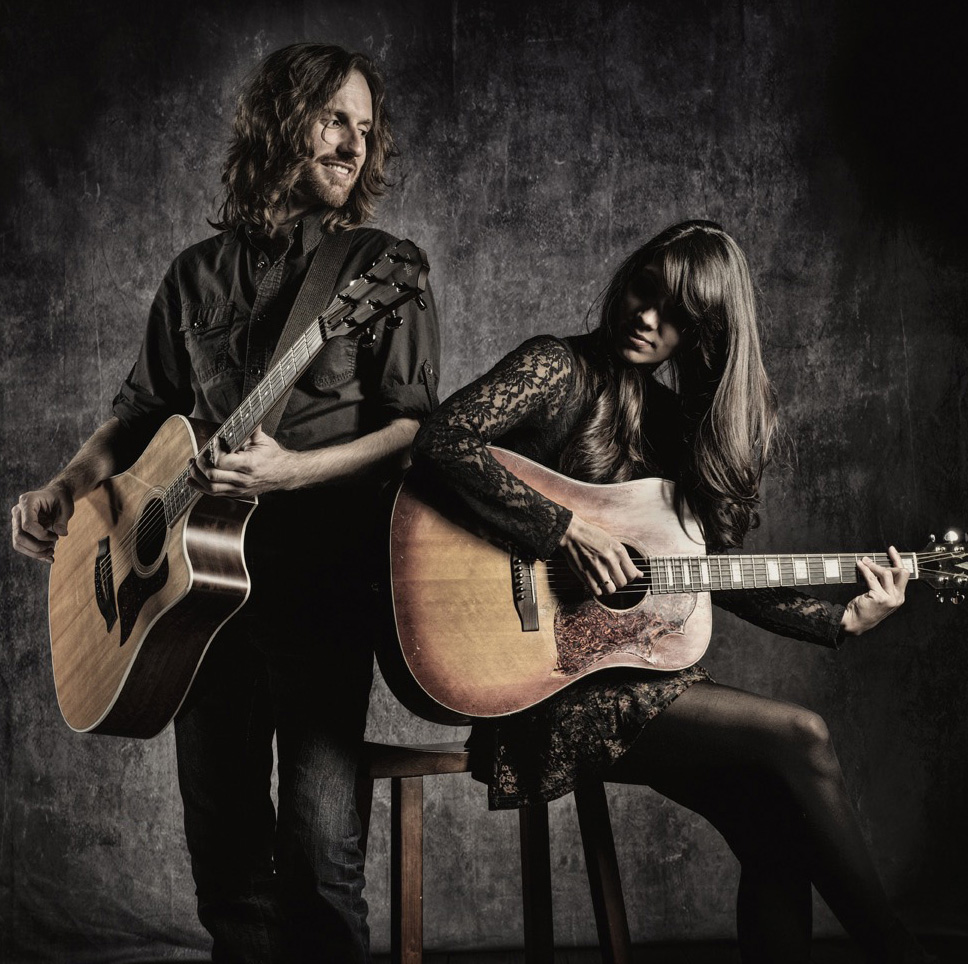 Miranda Dawn and Chris Hawkes first met when he crossed an Austin barroom floor and asked her to dance. A modest beginning became an undeniable attraction the first time they sang together and created a sound Texas Monthly calls “undeniably intimate”.

Dawn, a performing singer-songwriter was hosting her own songwriter group showcases and literally set the stage for a fateful convergence with Hawkes, a recording producer and touring artist who remembers “One night, after closing time, Miranda played one of her songs that instantly felt familiar so I picked up a guitar and played along.” Miranda Dawn admits “Our harmony just fell in and that was the moment we both felt that we should sing together–” She continues with more than a hint of genuine wonder “it was as if there was suddenly this third voice.”

Their initial duo effort, Golden Heart, climbed to No. 25 in Billboard’s Folk chart and landed at No. 2 in iTunes singer-songwriter albums and kicked off a whirlwind of cross-country touring and co-writing. Dawn and Hawkes recorded their second album, Yours and Mine, in between tour dates with influential artists like Alison Krauss & Dan Tyminski, Patty Griffin, Old 97s, Robert Earl Keen and showcasing at festivals like Austin City Limits, Folk Alliance, AmericanaFest, South By Southwest and TEDx on tours in the US and abroad in Denmark, Germany and Australia. “We’d tour, come home inspired, record a song, tour, rinse and repeat” explains Dawn.

The majority of the songs are co-writes, conceived in real-time while the couple’s relationship bloomed and the record stands as an unfiltered chronicle tracing a pair of hearts stumbling, floating, and sometimes soaring through life together. Though not without moments of sobering reflection, Yours and Mine is foremost a celebration of life’s genuinely beautiful moments that make us want to take another breath and another step – despite uncertainty.

Acoustic Guitar hails the musicality of Yours and Mine, as “Impeccable vocal harmonies and instrumentation”

The duo stored their possessions and lived on the road, drawing inspiration from American deserts and mountains, to the South Australian coast while navigating a shared journey through mortality, grief and compassion for differing perspectives. Upon returning to Austin, they set upon building a new home and self-producing their second full-length album, The Other Side, released in July 2018. The Austin American Statesman calls it “10 new tracks of sweet folk-rock — instantly appealing tunes — rooted in the singer songwriter heyday of the early 1970’s, they also fit well into the modern-day indie-folk revival.”

In a time when the world seems more divided than ever, this album explores themes of empathy, hope, and finding our common humanity. “While on our own adventures of ups and downs we found ourselves exploring themes of empathizing with the other side,” recounts Miranda Dawn. “We hope that you will hear this album and share it with someone you love, because these are anthems of compassion for everyone who’s ever felt on ‘The Other Side.’”