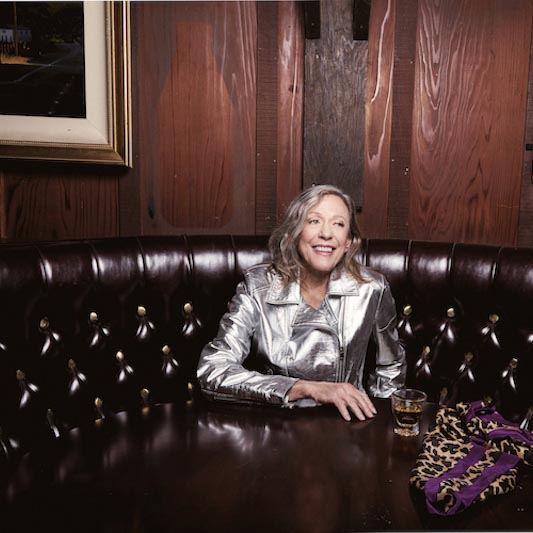 Her first album in 17 years!

Indeed, her contributions both on and off stage have done much to propel the Austin blues scene toward international prominence.

Whether recording with such friends as Marcia Ball, Lou Ann Barton, Sue Foley, and Stevie Ray Vaughan, or helping mastermind policies behind the success of Antone’s—the legendary Austin blues club—she has performed with unerring taste and verve.

For a major modern blues figure, the sultry blonde has not recorded prolifically, preferring to treat each album as a special event.

However, the albums she has chosen to share with the public are remarkably entertaining and expressive slices of gut-bucket blues revival and scintillating uptown soul.

Angela Strehli was born in Lubbock, TX in 1945. Shortly after graduating from the University of Texas in Austin, Strehli joined James Polk and the Brothers, a Soul/R&B group, and went on to form Southern Feeling with W.C. Clark and Denny Freeman, which became a local favorite. Her next move was to start The Angela Strehli Band which led to five consecutive awards from the Austin Chronicle for Best Female Vocalist. The “Queen of Texas Blues” was born.
In 1975, Strehli co-founded the blues club Antone’s which became internationally famous and still exists today. The venue became home to then long neglected blues masters including Muddy Waters, Albert King, Otis Rush, and countless others, and its house band was the newly formed Fabulous Thunderbirds featuring Jimmy Vaughan & Kim Wilson. Strehli would befriend a young Stevie Ray Vaughan at Antone’s when he would come to see if Albert King or another one of his idols would walk in.
Vaughan started playing “Texas Flood,” a song Strehli would perform regularly, and it became the title track to his debut album with Double Trouble in 1983. Vaughn would then have Strehli perform with him at many of his important appearances – Carnegie Hall, the CBS Records Convention, Austin City Limits among them. Strehli would then help establish Antone’s Records & Tapes, serving as President, and releasing her debut solo album Soul Shake in 1987. Following her acclaimed Blue Highway in 2005, Strehli eased into a prolonged hiatus… until now.
Angela Strehli has also announced a limited number of 2022 performances celebrating the release of Ace of Blues. The itinerary features two special engagements on November 15th and 16th at Antone’s in Austin, TX as well as appearances in Houston, Oakland, Santa Cruz, and her home base of Marin County, CA.
Policies | Terms of Use